Growing up an only child in Guangdong, China, Zhuoyan “Terry” Tao was surrounded by music.

“Since I was 5, my mother was playing classical music recordings in the house and on the way to school,” he said. “My father was more of a ’90s Hong Kong music fan. There was always music in my home.”

Tao plays multiple instruments and even wrote the score to his high school’s performance of an ancient Chinese love tragedy — “The King and the Concubine” — which, he said, was “pretty unheard of.” He performed it live at his high school’s drama festival. The whole cast then went on to play it at a New Year’s Eve gala before more than 3,000 students, teachers and alumni. Tao thanks his parents for opening his eyes to the powerful ways music brings people together.

Music has since led Tao toward a career that he is thrilled to explore: radio broadcasting. On his walks to school, he listened to Chinese radio hosts and American TV pundits like Stephen Colbert (“lifesavers” he calls them). He even plans on launching his own podcast.

Currently, Tao is excited to be an incoming first-year communication major at USC Annenberg. The chance of a lifetime was made possible by a USC Trustee Scholarship, which he hopes will offer him an “opportunity to give back to his family” by becoming a radio host who builds bridges between people.

What is the connection between music and radio broadcasting for you?

Radio hosting has a lot in common with music. I think the attraction of audio media is that it puts listeners into the exact same space for a fixed amount of time. [For example,] Whenever  you put on your earphones, for that five minutes, you’re in roughly the same environment as every other human being anywhere in the world listening to that show. My yearning to be a radio host has been hugely influenced by musical media. I hope to put everyone in the same environment.

Ironically, or perhaps prophetically, your Chinese surname means “good at speaking.” You launched an introductory public speaking course in junior high. What was the inspiration behind that? 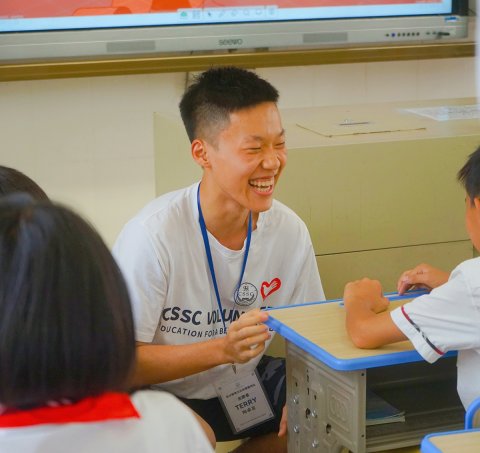 Tao teaching his public speaking introductory course to Chinese youth.
Courtesy of Terry Tao
I really value the first moment of conquering my fear of standing up on the podium or the stage. I decided that I would take that mission to more kids, mostly leftover kids. We went to primary schools in the more underdeveloped parts of China. I tried to push kids to experience that pretty frightening first moment and conquer their inner fear. I had 300 [enroll in the organization].

Speaking of exploration, why did you choose USC Annenberg?

I long to get a more complete view of everything outside of China. I competed in the United States Academic Pentathlon located in the heart of Los Angeles. Then I just visited the most prestigious school in the area. There’s a spirit of creativity on the USC campus and a really accepting vibe. How a research institution is able to blend with the lively vibe of downtown LA and Hollywood, it’s just unimaginable. It’s really unique.

What excites you most about attending USC Annenberg?

The really fancy equipment and microphones! Much better than my home-based studio. The specific rooms for making podcasts. I really love that. Also, the famous room with a lot of television screens! My mother is really excited about going to La La Land.

In high school, you excelled in a variety of extracurricular activities such as student government, soccer, STEAM Innovation and, of course, music. How has your cross-dominance helped you to avoid limiting labels?

Labels are arbitrary. People try to put people they are not familiar with into simple boxes that do not sum up who they are as a human being. For example, there’s an Asian pianist stereotype. There’s an Asian STEM kid stereotype.  But I believe in the right to explore and expand oneself. I do not want to be limited by a tag attached to me when it actually has not that much to do with the whole definition of myself. I hope to be perceived as a human being.

Besides Stephen Colbert, who are your heroes?

I really look up to Lin-Manuel Miranda. He spent so much time creating such a thorough creation and immersive experiences that connect people.

How do you envision your ideal future as a radio broadcaster and musician?

As a radio broadcaster, the audience really knows your voice and they are with you every day, but they do not know your face. So, you are still able to have a normal personal life. In my future, I hope to stay creating. I hope to be creative, open and fearless.