While driving around her hometown of Atlanta, Neha Halebeed — a sophomore communication major — wanted to give money to people she saw who were experiencing homelessness. However, she never had any physical currency on her. Technology has reduced the amount of cash in circulation, and COVID-19 has accelerated this by prioritizing touchless transactions.

To help overcome this barrier, Halebeed set out to create a system that could deliver donations to the unhoused population. Her proposal: a QR code-based cashless system to replace typical street-side cash donations. 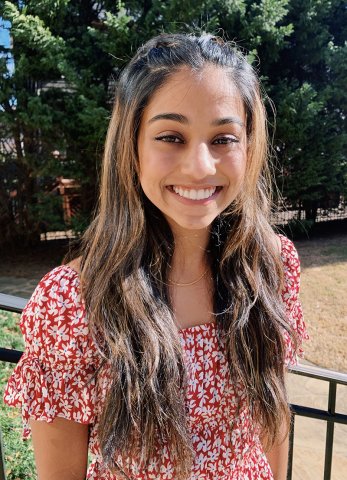 Neha Halebeed.
Photo courtesy of Neha Halebeed
For her visionary project, Halebeed has been recognized as one of 20 winners of Reimagine Challenge 2020, which invited college students to submit proposals on one of two themes: helping communities hit hardest by the pandemic, or sparking a global movement capable of motivating 1 million people to work together.

Halebeed earns a $25,000 tuition scholarship along with matching funds for USC, and her proposal is published in an online anthology. The challenge is sponsored by Schmidt Futures, a tech-focused nonprofit initiative founded by Eric and Wendy Schmidt.

Halebeed said she has long been interested in solutions-based philanthropy, having launched a charity while she was in high school. “I like thinking about different ways to do things and fix certain problems,” she said.

She began researching the possibility of giving QR codes to the unhoused that would allow them to redeem cash donations at businesses, a system that wouldn’t require any technology on the recipient’s side. She learned that a company in Greece had already begun working on a similar concept, which they dubbed Giving Streets. She reached out to them and has been working with them to develop the technology and bring it to the United States.

Halebeed explains that Greece’s initial test of the QR-code system will involve placing the codes in partner businesses like coffee shops and having the donations go to nonprofits that serve people experiencing homelessness rather than to individuals directly. She said that Giving Streets should be rolling out in Greece by April and hopes that the U.S. version will be ready by December.

She points out that there are legal hurdles to overcome — for example, making sure that donors can’t use these cash transfers to avoid taxes — but for her, the most important questions are ethical ones.

“We want to make sure that we’re not setting up something to benefit unhoused people that actually ends up hurting them,” Halebeed said “Centering this around the people themselves is really important.”

This year’s challenge received 838 submissions from students enrolled in 264 schools in 40 countries. Along with Halebeed, Tongqing Zhu, a master of social work student at the USC Suzanne Dworak-Peck School of Social Work, was recognized for her Sunrise Project, a proposal that aims to benefit the social and emotional well-being of elderly Asian immigrants in Los Angeles.

“I’m inspired by the bold ideas we received and the rising generation of leaders who developed them,” said Eric Schmidt, former Google CEO. “Although the long-term impact of this pandemic is daunting, we cannot forget we live in the most educated, interconnected, empowered period in human history. If we come together with all of our tools, knowledge, and talents — as these students have done — I’m confident we can build a world that’s fairer, safer and more prosperous for everyone.”

An extended version of this story appears on the USC website.