For women in popular music, the song is still the same

As Women’s History Month draws to a close, results of a new research report reveal that for women in music, the last decade has been one of insignificant change in the recording studio.

The study, “Inclusion in the Recording Studio?” is the fifth annual report on the music industry from  Stacy L. Smith and the USC Annenberg Inclusion Initiative. The report, funded by Spotify, provides a comprehensive industry update on inclusion across the Billboard Hot 100 Year-End Chart. Specifically, the study examines the artists, songwriters, and producers credited on each of the 1,000 songs on this popular chart from 2012 to 2021. The investigation also quantitatively analyzes the gender and race/ethnicity of every individual in those three roles. Additionally, the study assesses every Grammy nominee receiving recognition in the categories of Record the Year, Album of the Year, Song of the Year, Best New Artist, and Producer of the Year for the same time frame.

“Despite industry activism and advocacy, there has been little change for women on the popular charts since 2012,” said Smith. “Although the data reveal an increase for women of color, these findings indicate that there is more work to be done.”

The study also explored the intersection of gender and race/ethnicity for artists. Notably, 55% of all women artists in 2021 were from underrepresented racial/ethnic groups, as were 58% of 2021’s men artists. For underrepresented women, 2021 reflects a 6 percentage-point increase from 2020 (49%), though is still below the high watermark of 73% for women artists of color which occurred in 2018. Overall, 10% of women artists across the 10 years examined were women of color.

Consistent with previous years, the report found that women songwriters and producers remain outnumbered. In 2021, 14.4% of songwriters were women. This figure has not changed over time. Women comprised only 12.7% of the songwriters evaluated across all 10 years studied, a ratio of 6.8 men to every 1 woman songwriter. More than half of the songs on the Billboard Hot 100 Year-End Charts from 2012 to 2021 did not include any women songwriters.

For producers, women held only 3.9% of all producing positions across the songs on the 2021 Billboard Hot 100 Year-End Charts. The percentage of women producers in 2021 increased non-significantly from 2020 and 2012, but did not surpass the 7-year high point of 5% in 2019. Overall, across a total of 1,522 producing credits in the 10-year sample, 97.2% were men and 2.8% were women. This is a ratio of 35 men to every 1 woman producer. Only 10 producers across the decade-spanning sample were women of color. The ratio of men producers to underrepresented women producers is 148 to 1.

“For women songwriters and producers, the needle has not moved for the last decade,” said Smith. “In particular, women of color are virtually shut out of producing the most popular songs each year. We know there are talented women from all backgrounds who are not getting access, opportunity, or credit for their work in this arena.” 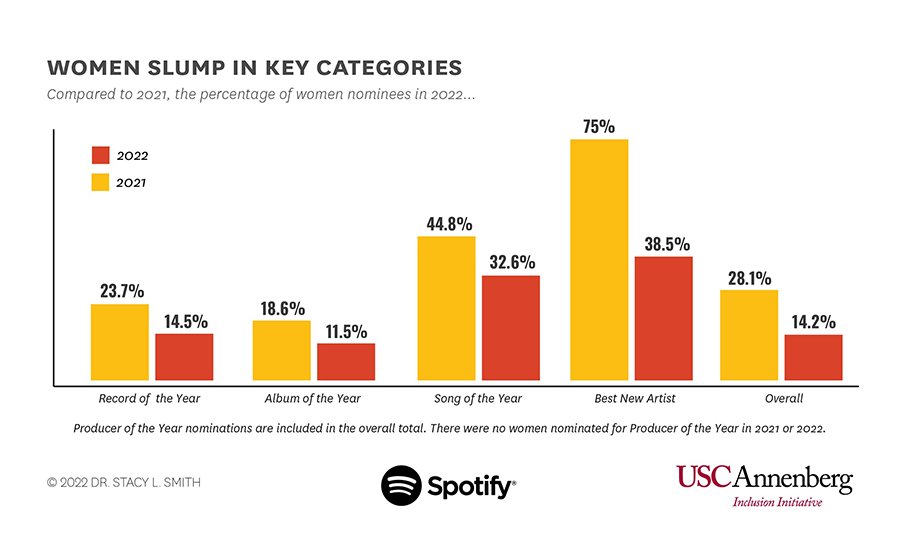 The study also investigates one solution that has been attempted to address the lack of women engineers and producers across popular songs. That solution, the Recording Academy’s Women in the Mix pledge, launched in 2019. Across the Hot 100 Year-End Songs in 2021, there were two women producers and engineers whose work could be potentially attributed to the Women in the Mix pledge. One, Ariana Grande, produced and engineered her own songs alongside two other pledge-takers. The second, Jenna Andrews, produced on a song that included a pledge-taker. Two other engineers, Heidi Wang and Gena Johnson, each worked with a pledge-taker in 2021.

Thus, only a handful of women who worked across the most popular songs in 2021 can be potentially attributed to the Women in the Mix pledge. Moreover, given that one woman produced and engineered her own songs, it is even more clear that the Women in the Mix pledge has not impacted the ranks of women producers and engineers on some of the most profitable songs in the industry.

“Industry solutions must do more than offer lip service to creating change,” said Smith. “They must take aim at the underlying reasons for exclusion and have robust evaluation and accountability metrics to ensure that they result in real progress.”

The report also updates last year’s analysis of 10 years of Grammy nominations across five categories. 14.2% of all nominees in 2022 in the five categories examined were women. In 2022, the percentage of women nominees decreased compared to 2021 (28.1%). This decrease occurred across 4 categories. As in 2021 and 8 of the previous 10 years, no women were nominated for Producer of the Year.

Overall, 13.6% of all nominees in these 5 categories over the last decade were women. Across the 10 years evaluated, women were more likely to be nominated for Best New Artist (44.4%) and Song of the Year (28.8%). On the other hand, they comprised the lowest percentage of nominees in the Album of the Year (9.7%) and Producer of the Year (1.9%) categories.

Furthermore, the study examines individual nominations by race/ethnicity for women. Of the 262 women nominated for a Grammy, 44.3% were underrepresented. The majority of white and underrepresented women were nominated only once across the 10 years studied. 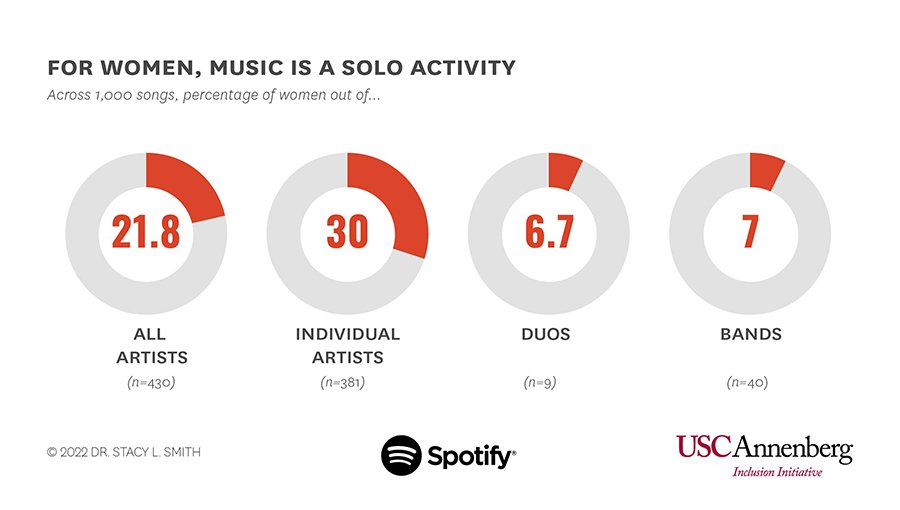 “Uplifting women in music is crucial, as it allows women to grow in their careers and opens doors for younger women aspiring to work in this industry,” said Karla Hernandez, the study’s lead author. “This is especially true for women of color, who are often excluded from prestigious institutions and career recognition. We must see women’s work showcased and nominated, giving them space in writing rooms and studios. By actively working toward inclusion, we can bring forth a new wave of talent and creativity.”

The report also provides solutions for change to increase the number of women as artists, songwriters, and producers and sustain the growth for underrepresented artists.

“To rise to a challenge, the industry must first understand it. This is why the efforts of Stacy Smith, Karla Hernandez and the entire team behind the USC Annenberg Inclusion Initiative are critical,” said Dawn Ostroff, chief content and advertising officer for Spotify. “These results underscore the need for action. We are committed to continuing to support this important research, to elevating women who can, in turn, create opportunities for women, and to making meaningful progress to improve equity across the world of music.”