New report shows diversity on the charts, but not in executive ranks of music companies

Nearly half of the performers on the Billboard Hot 100 Year-End Charts over the last nine years were from underrepresented racial/ethnic groups. Yet, a comprehensive new report from the USC Annenberg Inclusion Initiative found that the executive ranks fall far short of the charts when it comes to underrepresented and Black executives.

The study is the first in a series from Stacy L. Smith, Carmen Lee and the Annenberg Inclusion Initiative to examine race/ethnicity and gender in the executive ranks in the music industry. Covering 4,060 executives from the vice president level to C-Suite roles across 119 companies and six industry categories — from music groups, labels and publishers to radio, streaming, live music/concert promotion — the results provide an authoritative snapshot of diversity in music’s decision-making roles.

Far from being only a diagnostic, the report invites the companies it reviewed to adopt industry solutions to increase inclusion in the executive ranks. To that end, the report is designed to illuminate the problem while inviting music companies from across the industry to the table in a collective effort for change. Sponsored by Universal Music Group, the report can be found online here.

“Getting to the proper solutions requires a proper diagnosis of the problem. That’s why this report is so fundamentally important to increasing inclusion in music’s executive ranks; it serves as a resource and demonstrates that there are inclusion deficits across the industry — whether in labels, publishing, streaming, radio, or live music,” said Smith, associate professor of communication. “Industry problems require industry solutions. Based on our analysis and our deep experience in the entertainment industries, we provide remedies that music companies of all types can use to improve their performance.”

“Diversity is not enough,” said Lee, clinical associate professor of communication. “That’s just the first step in an ongoing process towards enacting meaningful change. Our goal is to move the conversation beyond identifying the lack of diversity and extend it towards understanding inclusion and belonging in the workplace. We need to understand the barriers and challenges that impede inclusion and a sense of belonging for individuals working within the music industry, especially those from underrepresented communities. Our hope is that the industry will come together to tackle this problem in a way that creates meaningful progress.

The study examined executive diversity in three ways: among CEOs and presidents across 70 major and independent companies; across senior management teams at nine major music companies; and in executive roles across 119 companies from the VP-level and above in six industry categories.

“Underrepresented and Black artists are dominating the charts, but the C-suite is a ‘diversity desert,’” Smith said. “The profile of top artists may give some in the industry the illusion that music is an inclusive business, but the numbers at the top tell a different story.”

Inclusion is an industrywide problem

Looking more expansively at a broader range of decision-making roles revealed that the executive ranks are also exclusionary. Of more than 4,000 executives at 119 major and independent companies and their subsidiaries, 19.8% of executives at the VP-level and above were underrepresented, 7.5% were Black, and 35.3% were women. (See Figure 3.) Underrepresented and Black executives varied little from the VP/head level of employment to EVP/SVP/GM roles, or in chief/president positions. 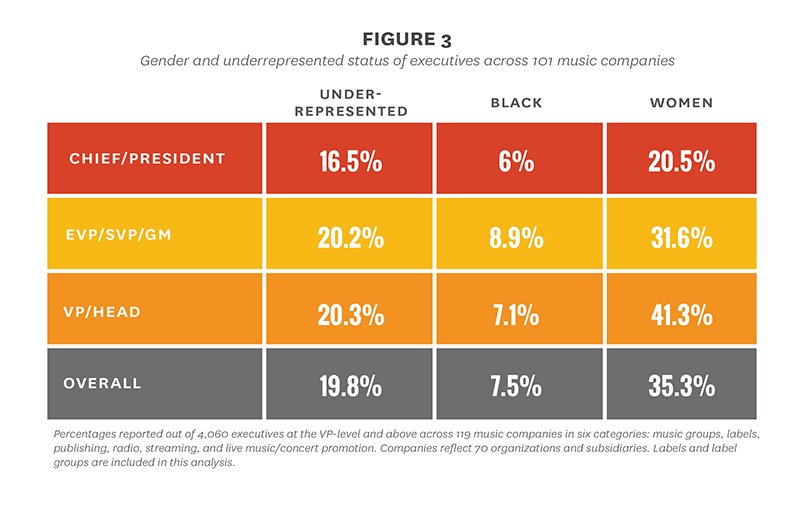 For women, as power increased, the percentage of women in executive roles decreased significantly. However, this trend was primarily driven by white women’s presence in the executive ranks. More than one-quarter (26.9%) of all executives were white women, with only 8.4% underrepresented women, which includes 3% of executives who were Black women. White women filled 32.4% of VP/head roles, 23.3% of EVP/SVP/GM positions, but made up only 14.7% of CEO/chief/president spots. In contrast, underrepresented women filled fewer than 10% of all roles: 9.2% of VP/head roles, 8.2% of EVP/SVP/GM jobs, and 5.6% of CEO/chief/president slots. Black women filled even fewer spots: 3% of VP/head roles; 3.3% of EVP/SVP/GM jobs, and 2.4% of CEO/chief/president positions. The path to influence in music looks very different for white women and women of color. 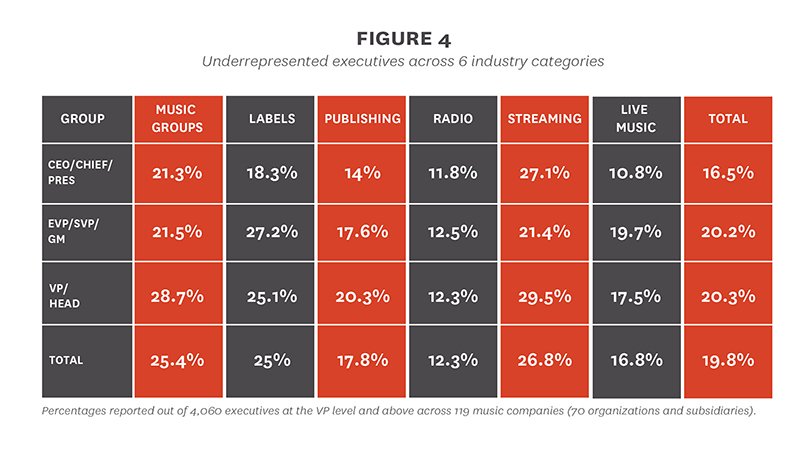 Record labels were the only category where the percentage of Black executives (14.4%) reached proportional representation with the U.S. population. In every other category, the percentage was less than 10%: 7.4% in streaming, 7.2% in music groups, 6.1% in publishing, 4% in radio, and 3.3% in live music and concert promotion. These figures are startling, given that Black artists were 37.7% of all artists on the popular charts in the last nine years.

Turning to women executives, not one category reached 40%. Live music and concert promotion came closest (39.1%), but other categories (e.g., music groups, streaming, labels) were similar. Roughly one-third of all executives in radio (33.2%) and publishing (31.9%) were women. 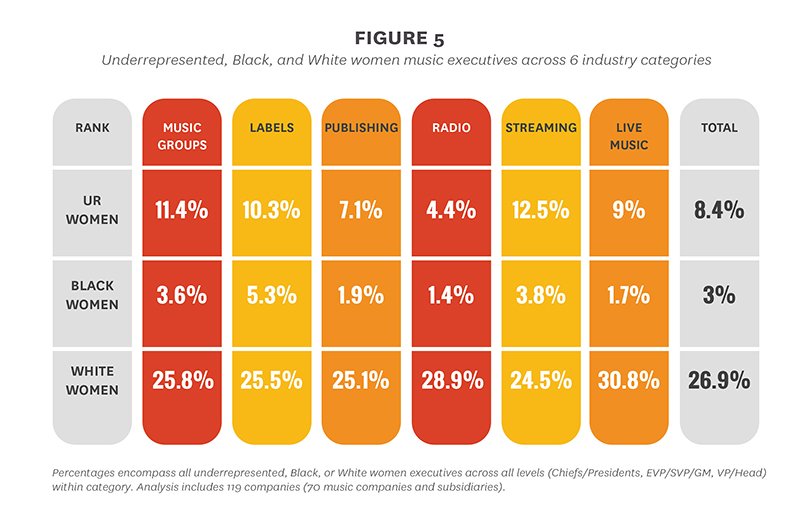 The study also shines a spotlight on one area that reflects the possibility for inclusion: artists and those who work with them. The researchers identified 1,750 solo artists signed to the labels investigated in the study. Of those, nearly half (48.3%) were from underrepresented racial/ethnic groups, 31.2% were Black, and 31.8% were women. The reason for music labels’ comparatively more inclusive performance also became clear when the artist & repertoire (A&R) executives were evaluated.

A full 34.2% of A&R executives across the three music groups and independent companies were underrepresented — which is close to proportional representation with the U.S. population — and 26.7% of all A&R executives were women.

Artists are surrounded by white representatives

A&R executives are only one facet of the teams that an artist might work with as they navigate the industry. The researchers narrowed the sample of artists to 242 individuals who had at least one song on the Billboard Hot 100 Year-End Chart over the last nine years. Then, the managers, agents and publicists who represented those established artists were scrutinized: a total of 321 managers, 243 agents, and 135 publicists. The inclusion profile varied by position. Nearly 40% of managers were underrepresented, and 30.8% of all managers were Black. These individuals were primarily men (27.7% underrepresented men vs. 11.2% underrepresented women), however. While 23.4% of managers were Black men, only 7.5% were Black women.

The profile of agents and publicists was lower than managers. Roughly one-fifth of agents (20.2%) and publicists (20.7%) were underrepresented, and only 11.1% of agents and 11.9% of publicists were Black. Nearly two-thirds (64.6%) of agents were white men while 51.9% of publicists were white women. Very few underrepresented women (4.5%) worked as agents for established artists. Moreover, only three Black women (1.2%) were responsible for the artists in this sample. Further, less than a tenth of all agents (9.9%) were Black men. Only six (4.4%) Black men worked as publicists and 10 (7.4%) Black women held this role for established artists.

The researchers offer several solutions to address disparities facing underrepresented, Black, and women executives across companies (see Figure 6). These remedies touch on global strategies for inclusion but are also specific to businesses. Additionally, the authors consider how to increase the presence of underrepresented and Black managers, agents, and publicists in music and emphasize the impact this can have for audiences.