This article is republished with permission from The Conversation, co-written by François Bar, professor of communication; Cerianne Robertson, PhD student in communication; and Graham DiGuiseppi, PhD student at the USC Dworak-Peck School of Social Work.

The day the governor of California ordered the closure of dine-in restaurant operations, gyms, fitness centers and movie theaters because of the coronavirus, staff members of the Los Angeles Community Action Network, a grassroots human rights organization comprised of poor housed and houseless Angelenos, scouted the streets of Skid Row to check on the hand-washing stations the city had installed, phones in hand.

General Dogon, one of the staff, stopped at one station and pumped the foot pedal to turn it on. Turning to face his colleague Monique Noel’s phone camera, he said: “The problem is, there is no water.”

In Downtown Los Angeles’ Skid Row, an estimated 4,757 people experience houselessness on a given night, and approximately 2,783 of them live unsheltered on the street. These residents cannot easily follow the Centers for Disease Control and Prevention’s advice to stay at home and wash their hands frequently.

City officials said they installed 250 hand-washing stations across the city, but by Dogon’s count on March 16, the day of the governor’s order, only a few had been placed in Skid Row. Several of the stations were dirty and lacked soap, fresh water or both.

Before COVID-19 became a crisis in LA, we – a Ph.D. student studying media power and cities, a Ph.D. student studying health interventions for youth experiencing homelessness and a professor studying social and economic impacts of information technologies – were engaged in participatory research projects with the Los Angeles Community Action Network (LA CAN) and other students in a USC-Annenberg graduate seminar on “Research, Practice and Social Change.” Recognizing the immense threat that COVID-19 poses to residents of informal settlements, this community-university collaborative began building a grassroots network of DIY hand-washing stations.

The hope is that others may learn from our story and provide rapid response to support houseless communities in their own neighborhoods and cities. We believe our story demonstrates the power and importance of community ownership and organizations that build grassroots networks over time. 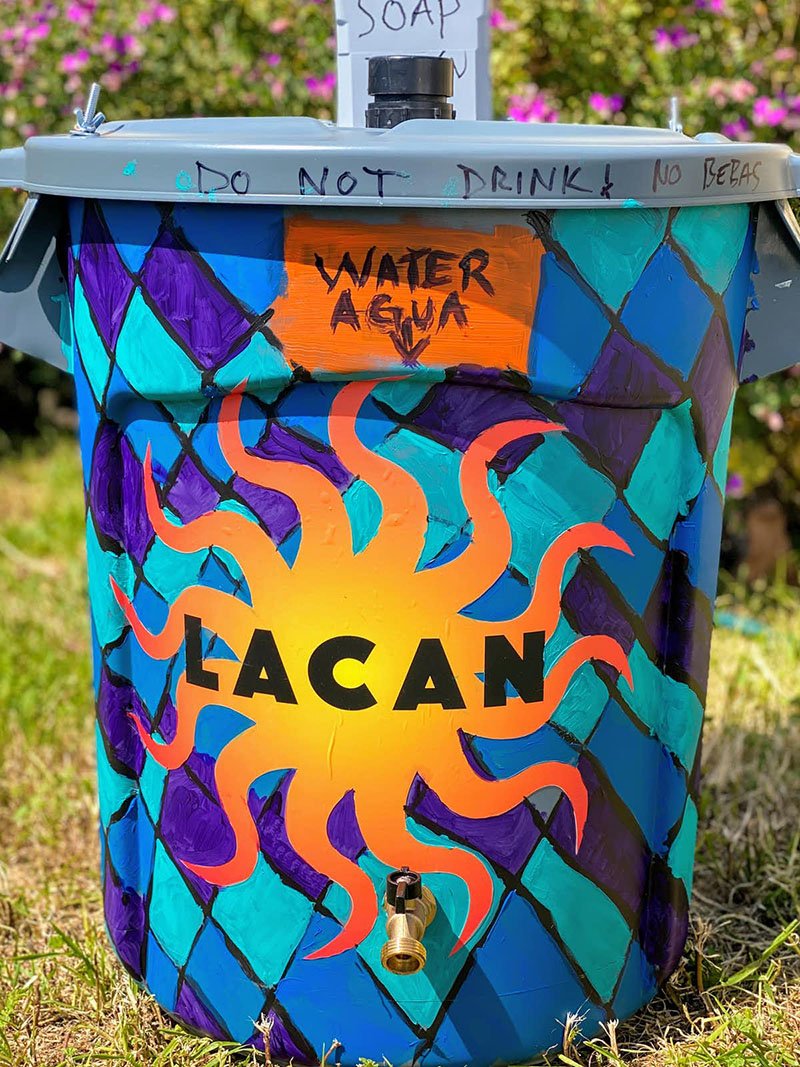 Switching plans because of COVID-19

The idea was born at a meeting of LA CAN’s Human Rights Strategy Committee where participants were discussing the impact of COVID-19 on the organization’s “Dirty Divide” campaign, a decades-long effort to advocate for improvements to Skid Row’s inadequate public health infrastructure.

That led to a conversation about how the Congolese fought the Ebola crisis – with sanitation stations – and how to emulate this in Skid Row. LA CAN shared the idea with the USC team on what would be the first of many Zoom videoconference calls over the following days.

The LA CAN / USC collaborative researched a number of DIY hand-washing station models, experimented with building prototypes and got five pilot stations on the streets within the first few days, with over a dozen more ready to be deployed soon. The group is also mapping the DIY stations, as well as existing sanitation spots and hand-washing stations newly installed by the city.

For inspiration, the collaborative assembled a scrapbook of examples from around the world showing how people have improvised hand-washing stations.

The “dragon station,” our modified version of a DIY Camp Sink, is a community favorite. For about US$50-$70 worth of materials, this turns two buckets with lids, a pump, a hose and some sort of basin – and, in our case, a plastic dragon repurposed as a faucet and soap dispenser – into a mechanism that takes clean water from one bucket and disposes dirty water into the other. In comparison, the commercial hand-washing stations we researched cost over $400 and were in high demand, taking a minimum of four to six weeks to ship.

The city’s top-down approach was to drop off hand-washing stations that need to be periodically refilled with soap and water, but now city workers are staying #SaferAtHome and the stations have run dry. After touring some of the city’s empty sanitation stations on April 3, U.S. District Judge David O. Carter concluded that “the sanitation facilities in Skid Row continue to be inadequate to meet the exigencies of the COVID-19 health crisis.”

In contrast, the LA CAN / USC group is attempting to build a bottom-up grassroots network. Friends and supporters make DIY hand-washing stations. They’re not quite as slick as the city’s but are arguably prettier, as they’re hand-painted with designs and instructions.

LA CAN places the hand-washing stations with street community leaders that the organization knows from its years of organizing work in the neighborhood. These leaders maintain the stations, explain how they work to other Skid Row residents, share knowledge about safe practices and generally support their community. To refill the stations, they call on nearby supporters including housed neighbors and adjacent buildings and stores, some of whom also provide liquid soap and sanitizer – a grassroots networks in action.

People from around the city are also contributing to the hand-washing station map – not only identifying the sanitation locations, but also providing updates on the availability of soap and water at each station. The icons for each station turn green if they are fully functional, red if they have run dry and yellow if they have water but something else is wrong. They are blue when their status is unknown; there may be a station there but no one has checked it out. 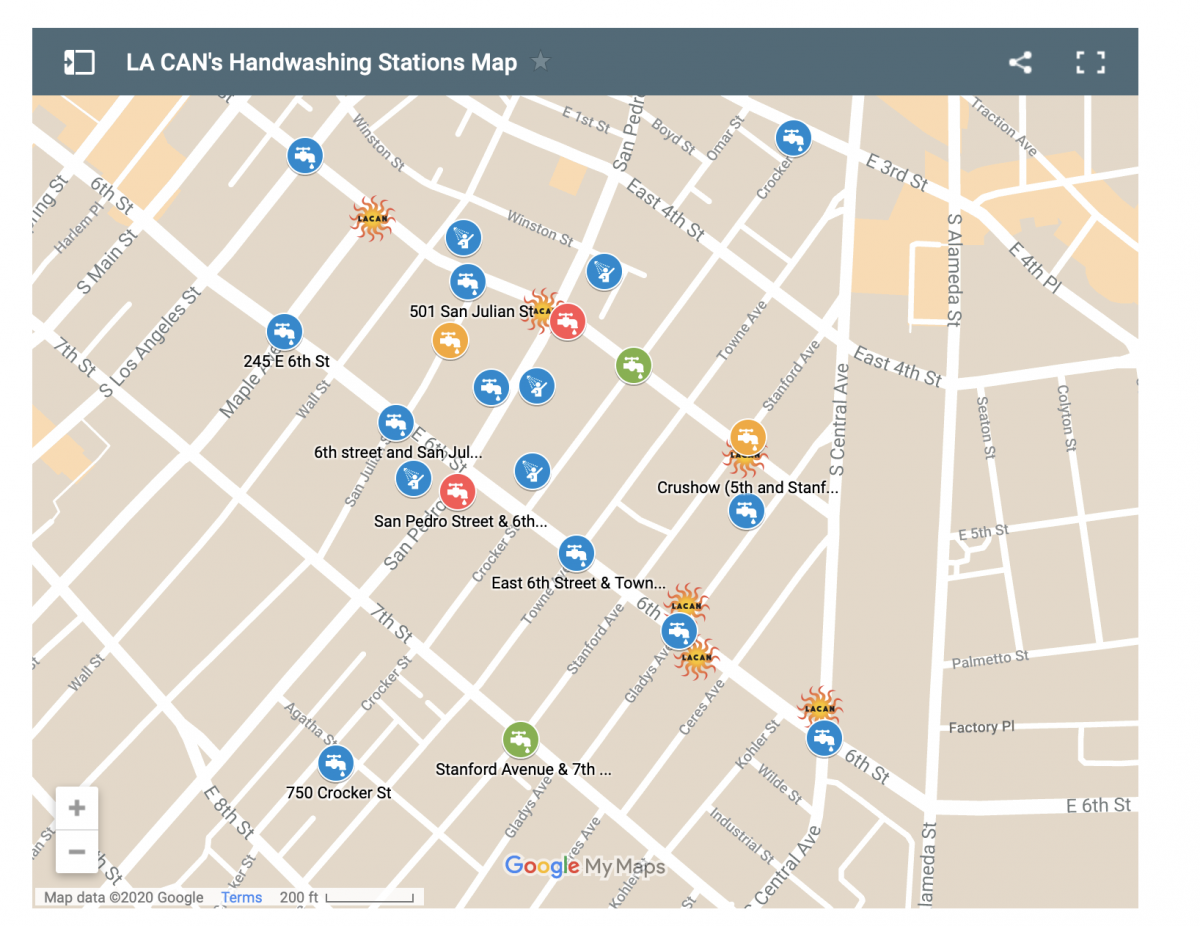 The participants and supporters from beyond Skid Row are a mix of people from LA CAN’s organizing and human rights networks and people from the USC network, highlighting what we see as an advantage of a collaboration between community organizers and academic researchers.

The group divides tasks strategically among the participants. LA CAN staff take the lead on community outreach and station implementation, drawing on their existing relationships in and knowledge of the neighborhood. Besides building and testing prototype stations, the USC team’s contributions are mostly virtual: building the map and making content for the fundraising campaign via LA CAN’s social media platforms, always taking cues from the experts at the community organization.

To create lasting change, we believe grassroots organizations and academics must work together to understand obstacles, design and test practical solutions, and develop community practices around those solutions. Forging and strengthening these relationships over time means that when a new crisis strikes, we can be ready to hit the ground running.