This story was originally published on USC News.

While many K-12 students have adapted to online learning, a USC study finds that some families have had trouble accessing devices or reliable internet connections, especially Hispanics who primarily speak Spanish.

Access to devices, broadband connectivity and parental engagement are the strongest predictors of online learning success for K-12 students, with varied results along family income and demographic lines.

Those are the conclusions of the latest round of results from the 2021 Statewide Survey on Broadband Adoption by USC and the California Emerging Technology Fund.

The survey of 575 parents with K-12 age children showed the transition to online learning has been difficult for many, including Hispanic families whose primary language is Spanish. 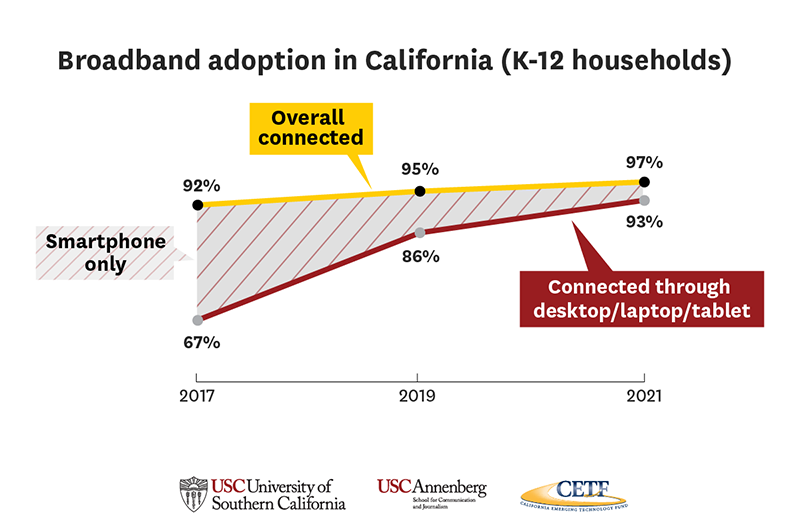 Gaps in resources persist across California, affecting an estimated 300,000 students. With support from school districts, 97% of children from white families had their own device, with Black and Asian families a single percentage point lower. That percentage was 92% for Hispanic families whose primary language is Spanish.

Income also has had a notable impact on device availability, though support from schools helped close the gap, USC researchers noted.

Overall, family support for children’s online learning also varies across demographic and income lines. Higher-income families tend to have an easier time navigating online K-12 education while families that primarily speak Spanish face more difficulties, USC researchers wrote. These factors should be taken into account by school districts as they attempt to bridge language barriers and improve access to technology.

“There’s an opportunity here to leverage the lessons of the pandemic and extend solutions beyond the pandemic,” said Hernán Galperin, associate professor at the USC Annenberg School for Communication and Journalism and the survey’s principal investigator. “For students to succeed, families need access to computers, reliable broadband and the ability for parents to participate in the learning process. That participation involves close communication with teachers, supporting students with homework and monitoring their progress. These are key elements for student success in the digital age.”

“Distance learning changed education, and now is the time to seize the lessons learned during school shutdowns to effectively integrate technology tools in K-12 education at school and at home,” said Sunne Wright McPeak, president and CEO of the California Emerging Technology Fund. “We know from on-the-ground experience that it starts with a computing device and reliable, affordable internet at home. It also requires vital components to help parents who qualify access discount internet offers in order to close the homework gap and promote engagement in their children’s education. There is no time to wait.” 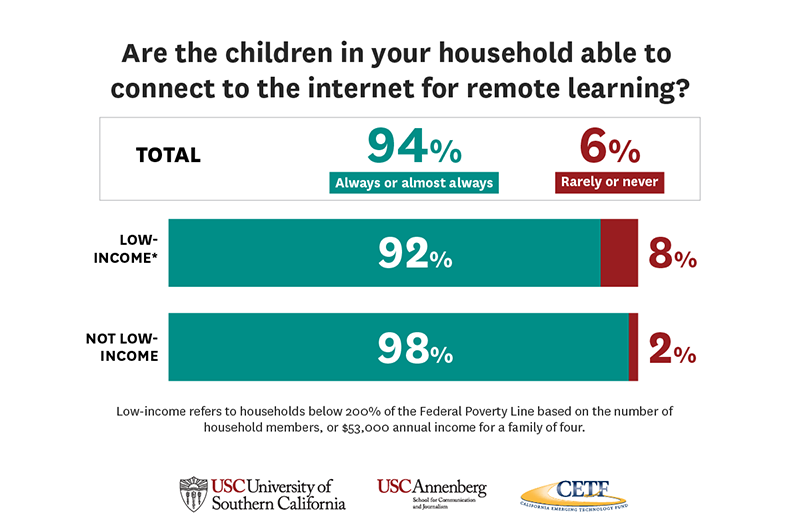 Distance learning requires reliable access to affordable high-speed internet. While 97% of families with school-aged children have internet access at home, the connections vary by reliability and speed. And 6% say they are rarely or never able to connect to the internet for remote learning.

When asked what they plan to do when subsidized connectivity plans end, more than two-thirds (70%) of the parents said they would pay for broadband themselves.

Many internet service providers in California offer low-cost options for families whose students or schools are enrolled in the National School Lunch Program. Only a third of K-12 parents were aware of those options, suggesting a long-term need for well-publicized, affordable plans. 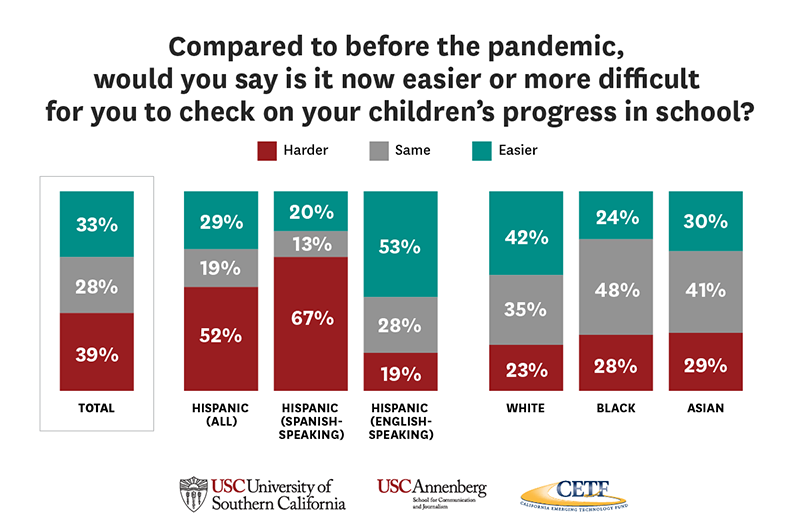 Parental engagement with schoolwork, monitoring progress and communication with teachers are key factors in student success while online learning.

Overall, 40% of those surveyed said it’s now harder, compared to before the pandemic, to follow their children’s progress. More than half (52%) of all Hispanic families reported greater difficulty with tracking progress, a percentage that jumps to 67% for Hispanic families whose primary language is Spanish.

Under 30% of white, Black and Asian families said they had a harder time tracking their kids’ academic progress. Percentages rise when parents are asked if they’re having more difficulty than before the pandemic helping their children with schoolwork. 63% said yes. That figure rose to 70% for Hispanics and 75% for Spanish-speaking Hispanics.

“Technology can make things faster and more efficient, but only when it’s accessible,” said Stephen Aguilar, co-author and assistant professor at the USC Rossier School of Education. “Hispanic parents who speak Spanish at home, for example, reported more difficulty following their child or children’s school progress when compared to Hispanic parents who speak English at home. This suggests the obvious: we need to pay attention to people as much as we pay attention to technology.”

Disparities across incomes, families in access to devices used for online learning

Ninety-five percent of respondents said they have access to devices for online classes, which indicates investments in broadband equity have been worthwhile. In addition, 98% of respondents with incomes above 200% of the federal poverty line ($53,000 annual income for a family of 4) said all children in their household have a computer for remote learning. However, that is not the case for 10% of families with annual incomes below $40,000.

School- and district-provided devices were widely used: 72% of families reported that they were using devices loaned to them. The vast majority said the device was received during the pandemic.

Programs that supply devices appear to have reached those in need: 82% of low-income families reported their device or devices came from a school or district. Higher-income families are more likely to provide their children with their own device; 62% have relied on a school-provided device.

Most families with school laptops, computers or tablets say they’re used exclusively for K-12 education and are not used by other family members, suggesting that parental training may provide opportunities to increase internet engagement among low-income, multigenerational households.

The Statewide Survey on Broadband Adoption has been conducted annually or biennially since 2008. This year’s survey of 1,650 California adults was conducted from Feb. 10 to March 22 in English, Spanish, Mandarin and Vietnamese, with 94% of interviews conducted via mobile phones and 6% via landline to reflect patterns in the population. The overall sample error is plus or minus 2 percentage points with a 95% confidence interval. The survey results are weighted for age, gender, race/ethnicity, education and region based on totals from the American Community Survey.