Photo by Shutterstock
Research and Impact

As the world marks International Women’s Day, for women in the music industry, a new study reveals that for women in music, there is little to celebrate when it comes to industry change.

The fourth annual iteration of the “Inclusion in the Recording Studio?” report was conducted by Stacy L. Smith and the USC Annenberg Inclusion Initiative, with funding from Spotify. As in previous years, the study includes an assessment of gender and race/ethnicity for artists, songwriters, and producers appearing on the Billboard Hot 100 Year-End Charts from 2012 to 2020. The study also provides an update on the percentage of women nominated for a Grammy award in the categories of Record of the Year, Album of the Year, Song of the Year, Producer of the Year, and Best New Artist for the past nine years.

“It is International Women’s Day everywhere, except for women in music, where women’s voices remain muted,” said Smith. “While women of color comprised almost half of all women artists in the nine years examined, there is more work needed to reach inclusion in this business.”

Women were 21.6% of all artists on the Billboard Hot 100 Year-End Charts across the past nine years and represented only 20.2% of artists on the chart in 2020. The 2020 percentage reflects the reality that there has been no meaningful and sustained increase in the percentage of women artists in nearly a decade. Few women appeared on the chart in duos (7.1%) or bands (7.3%) and were most likely to perform as solo artists (30%). 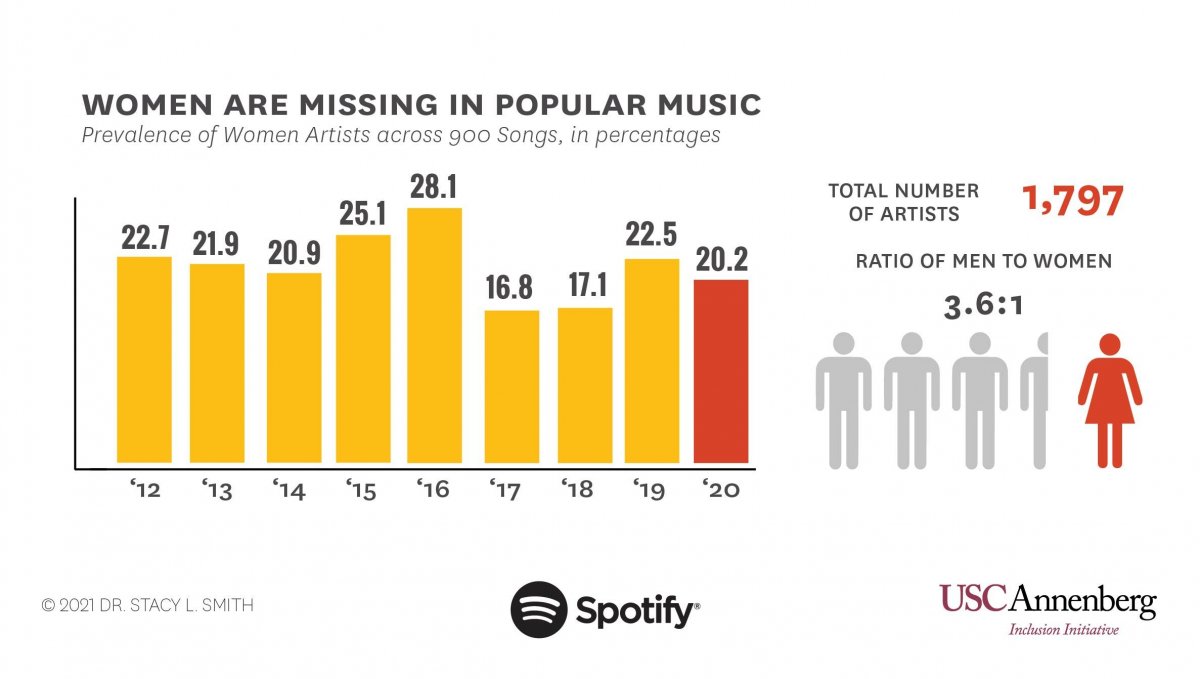 The study also explored the gender and race/ethnicity of artists. Notably, 45.1% of all women artists were from underrepresented racial/ethnic groups, as were 47.3% of artists who were men. 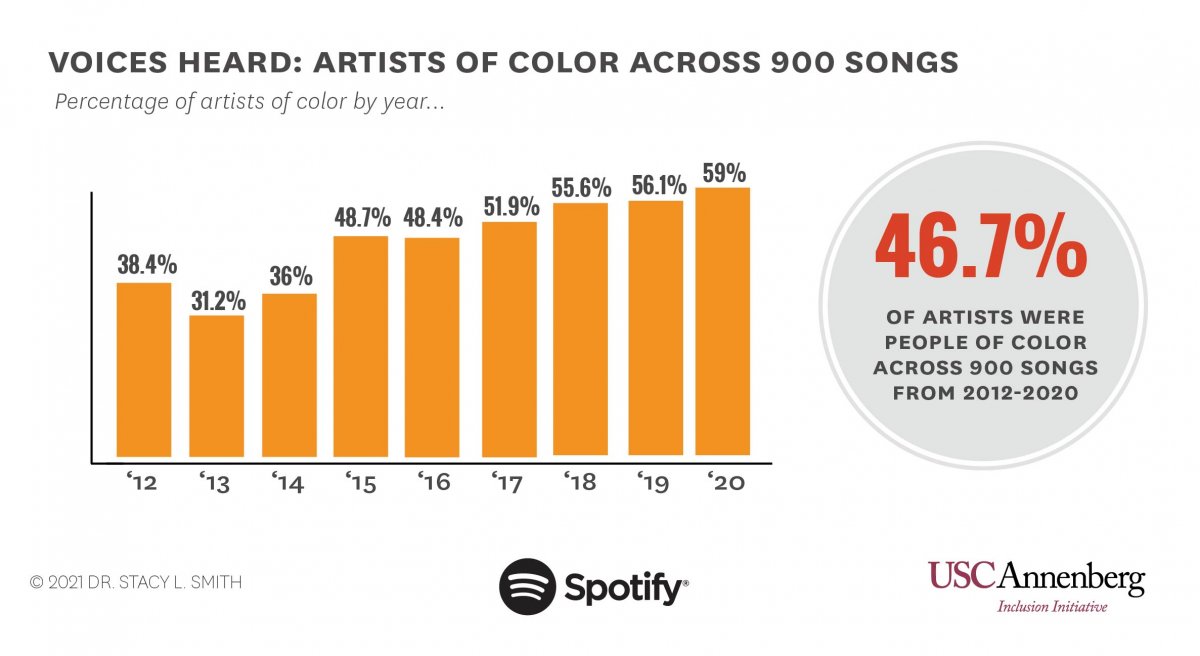 Women filled the fewest percentage of roles as producers — women held only 2% of all producing positions across the 2020 Billboard Hot 100 songs. A subset of 600 songs from the main sample were examined for producing credits. Overall, women represented 2.6% of producers in these songs, and earned a total of 33 producing credits, nine of which went to women of color. This translated to only seven individual women of color working as producers and a ratio of men to underrepresented women in this role of 180 to 1. 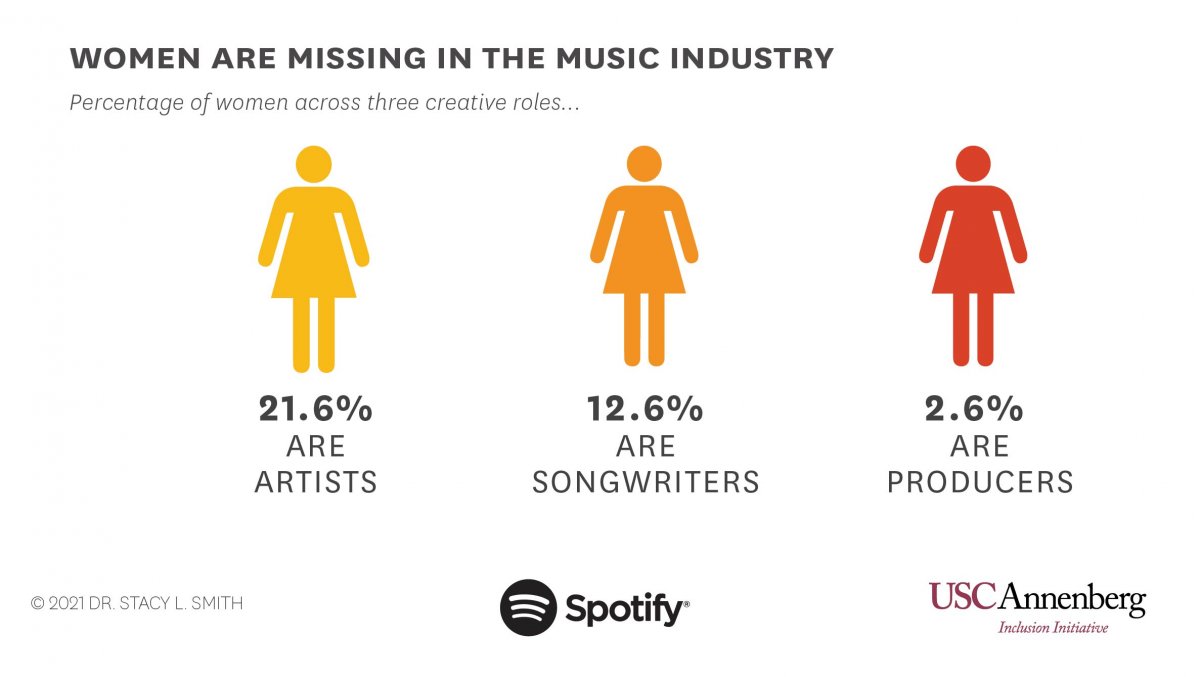 “Women producers — and particularly women of color — are virtually erased from the music industry,” Smith said. “Only 5% of the songs in our sample spanning nine years of popular music had a woman producer. Harnessing the opportunity to showcase women’s talent and their creative contributions is essential if the record business wants to reach equality.”

The investigation included an analysis of how the Recording Academy’s Women in the Mix pledge has influenced the percentage of women producers. Only four women producers were credited on the 2020 Billboard Hot 100 Year-End Chart — none of whom worked with one of the 38 pledge-takers who had a song on the chart. Moreover, Ariana Grande was the sole pledge-taker to work with a woman engineer — herself — of those who appeared on the chart. While women producers and engineers may have worked on less popular songs as a result of this initiative, the pledges and support did not influence the percentage of women producers on the year-end chart.

“In contrast to the 4% Challenge surrounding women film directors, the Women in the Mix pledge has not had a meaningful impact on popular songs and producers,” said Smith. “Solutions like the Women in the Mix pledge require pledge-takers who are intentional and accountable, and an industry that is committed to making change — something that clearly has not happened in this case.”

The report goes beyond popular music to update the Initiative’s findings on Grammy nominations in five popular categories over the past nine years. In 2021, 28.1% of all nominees in the five categories examined were women. Nominations in 2021 reflect an increase over both 2020 and 2013 — thus, while women represented 13.4% of nominees across the nine years, their share of nominations has increased over time. 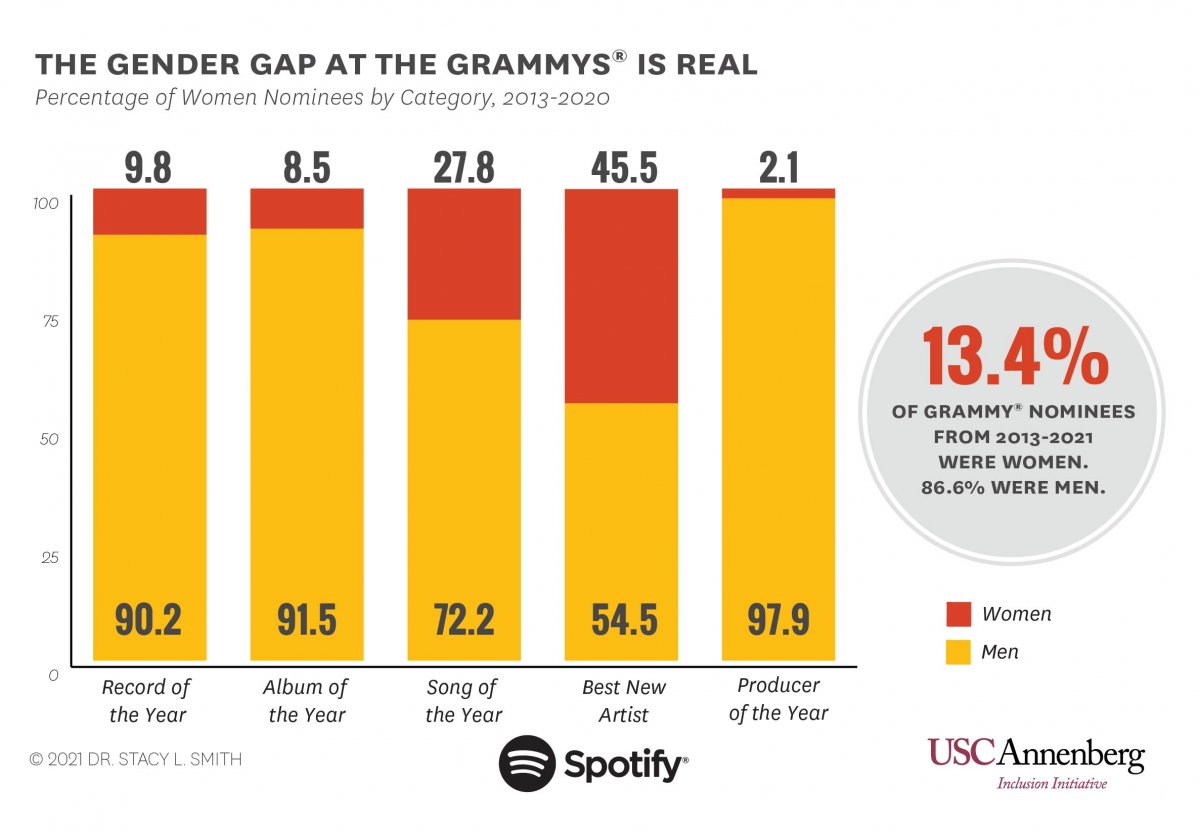 This year was a high point for women nominees in four categories: Album of the Year, Record of the Year, Song of the Year, and Best New Artist. However, no women were nominated for Producer of the Year for the eighth of nine years studied. Of the women nominees over the last nine years, 38.5% were women of color. While this overall figure approaches proportional representation with the U.S. population, it does not align with the percentage of women of color who appeared on the popular year-end charts. Moreover, in all but one category, women of color were less likely than white women to be nominated for a Grammy award.

"The work that Stacy Smith and her team have done with the USC Annenberg Inclusion Initiative has been instrumental in broadening the conversations around gender equity issues,” said Dawn Ostroff, Chief Content & Advertising Officer, Spotify. “While there is still more work to be done in this area, we are proud to support creating change within the music industry.”