During Spring Break, Master of Public Diplomacy students Amanda Lester, Jung-hwa “Judy” Kang, and Justin Chapman represented the MPD program on a professional development and networking trip in the District of Columbia.

The MPD delegation met with officials from, and attended events at: the State Department, Voice of America, Congress, the Kennedy Center, the British Council, the Atlantic Council, the Brookings Institution, the United Nations Information Center, the White House, Global Ties U.S., the Korean Embassy, the Kazakhstan Embassy, the National Air and Space Museum, and more.

Powell said public diplomacy is growing in popularity, thanks in large part to USC and the Center on Public Diplomacy (CPD).

“Everybody says the USC CPD website is the gold standard globally for public diplomacy,” he said. “These are people who teach at other major universities and use the website shamelessly. People come from around the U.S. and abroad to see what resources there are. It’s interesting to see how PD and the study of it is viewed with such interest.”

Last year Google approached Powell and CCLP and asked them to study the Internet of Things (IOT).

After offering even more cogent insights into the changing media and technology landscapes, Powell introduced a special guest — who had in fact brought his own special guest.

Daniel Whitman, former Program Officer at the U.S. Embassy in Pretoria, brought his new book “Outsmarting Apartheid: An Oral History of South Africa’s Cultural and Educational Exchange with the United States, 1960-1999,” and a friend and colleague, Abdin Noboa-Rios, Ph.D. A native of Puerto Rico, Noboa-Rios is writing a book on the growing Latino education crisis in America. Discussion topics included: the distinction between public diplomacy and development; lessons from Whitman’s experiences in post-apartheid South Africa; arguments for continued funding of international exchange programs; transferring lessons from the international to the domestic sphere; and ideas for future research.

“Culture is politics,” Whitman said. “We understood that for a brief time but then we lost sight of it. It’s during the relaxation of tensions that you need to increase outreach to other cultures, not decrease.”

Whitman pointed out that there is a thin line between legitimate public diplomacy and propaganda.

“In public diplomacy, we converse, we share ideas, and we listen,” he said. “As soon as you’re doing one way communication, even if you’re telling the truth 100%, you’re not furthering any goal, and the audience will not trust you.”

Later that afternoon, the MPD delegation visited Voice of America (VOA), the U.S. government’s broadcast institution, whose programming is directed at foreign audiences, especially in places where U.S. news is otherwise not readily available. USC Annenberg has a special connection to VOA: former USC Annenberg Dean Geoffrey Cowan served as the 22nd Director of VOA from 1994-1996.

During the visit to VOA, the MPD delegation was privileged to meet with the institution’s acting director, Kelu Chao, who talked to the students about how VOA is adapting to the changing media environment, maintaining its objectivity while still serving as a diplomatic tool, and working to engage its audiences by generating in-depth discussions.

Ryan McElveen, assistant director of the Brookings Institution’s John L. Thornton China Center, gave an overview of both the Institution and its China Center, which is among the most respected in the world.

Following a tour of the Brookings Institution’s facilities, the MPD delegation sat in on a forum with keynote speaker Filippo Grandi, the newly appointed United Nations High Commissioner on Refugees (UNHCR).

The MPD delegation then traveled to Capitol Hill, where they were led on a tour of the Capitol building by the staff of Congressman Adam Schiff (D-28th District, CA).

Following the tour, the MPD delegation met with Congressman Schiff. They discussed his role on the House Select Committee on the Benghazi Attacks, the importance of diplomacy in strengthening the U.S.’s national security, the controversial issue of “comfort women” between Japan and South Korea, and Schiff’s Freedom of Speech Caucus.

“For some years there was some level of disdain for diplomacy efforts, but people have recognized that there are real limits to even the most powerful military in the world,” he said. “So some of the steam has gone out of the school of thought that diminished the value of diplomacy.”

Following their meeting with Schiff, the MPD delegation traveled to the other side of the city to meet with representatives of the John F. Kennedy Center for the Performing Arts, Madeleine McGill and Sarah Kyrouac.

Day three included multiple meetings at the U.S. Department of State and speaking with Ambassador Capricia Marshall at the Atlantic Council.

At the State Department, the students met first with Judith Snyderman and Lindsey Spector from the Bureau of International Information Programs (IIP), as well as a student group from Syracuse University, with whom they discussed the increasing use of social media and other digital tools for global engagement.

Next, they met with Mark Taplin, deputy assistant secretary for policy at the Bureau of Educational and Cultural Affairs (ECA), and Alyson Grunder, director of the Office of Policy and Evaluation at ECA. They talked about what has and has not changed in ECA over the past twenty years and answered questions on evaluation, alumni management, and the relationship between ECA programs and foreign policy objectives.

Afterward, the students met with Robert Hilton, director of press and public diplomacy in the Bureau of Near Eastern Affairs (NEA), and Caroline Nohr, an MPD alumna and country coordinator for Australia, New Zealand, & the Pacific Islands in the Bureau of East Asian and Pacific Affairs (EAP). Discussion focused on programming strategies and sensitivities in these regions, the Obama administration’s “rebalance” towards the Asia Pacific region and its effect on public diplomacy, and the importance of giving public diplomacy specialists input into policymaking and policy implementation.

The visiting students were excited to have lunch with a few MPD alumni who work at the State Department. Melanie Ciolek is a policy officer with IIP. Martha Adams is a public affairs specialist in the Office of Strategic Planning in the Bureau of Public Affairs (PA). Henrietta Levin is a presidential management fellow with the Office of the Secretary of Defense, currently detailed to the State Department. These alumni shared work experiences and helpful advice on careers and internships.

In the afternoon, the students attended a press briefing at the State Department. The Deputy Spokesperson Mark Toner fielded questions from the press on the possibility of the U.S. recognizing the violence against religious and ethnic minorities in Syria by the Islamic State as genocide, the Russian exit from Syria, press freedom in Turkey, and other current issues. 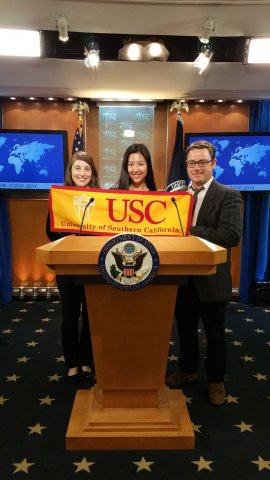 Master of Public Diplomacy students at the U.S. Department of State.
Courtesy of Justin Chapman

The students later met with Xander Vagg, foreign affairs officer at the U.S. Diplomacy Center, a museum and educational center for American diplomacy scheduled to open in late 2017 or early 2018.

Following the State Department visit, the students met with Capricia Marshall, ambassador-in-residence with the Adrienne Arsht Latin America Center at the Atlantic Council.

Marshall and the students discussed her career in public service, programs she started involving ambassadors and gastrodiplomacy, careers at think tanks, the economic and security benefits of investing in programs that promote mutual understanding, and maintaining a work-life balance.

The next day the MPD delegation had meetings at the United Nations Information Center, the Kazakhstan Embassy, the Korean Cultural Center, and Global Ties U.S., plus tours of the White House and Ford’s Theater.

At the United Nations Information Center, the students met with Deputy Director Andi Gitow. They discussed the center’s role, to serve as a focal point and resource for UN news and information so as to advance understanding about the UN and its work.

While students Judy Kang and Amanda Lester toured the East Wing of the White House, Justin Chapman paid a visit to Ford’s Theater, where President Lincoln was assassinated, before heading back to Los Angeles.

In the afternoon, Kang and Lester met with Arman Sapargaliyev, second secretary (Energy) in Economic Affairs at the Embassy of the Republic of Kazakhstan. Discussion centered on Sapargaliyev’s role in attracting American corporate sponsors for the 2017 Astana Expo, the theme of which is “Future Energy.”

During their final day in D.C., the MPD representatives visited the British Council USA and the Smithsonian Institution’s National Air and Space Museum.

At the British Council USA, located next to the British Embassy, the students met with Director Paul Smith, who has a distinguished career in cultural relations.

Smith and the students discussed the differences between the British and American structures and traditions of public diplomacy, the increasing recognition that culture is at the heart of society and identity, and the British Council’s work to be more inclusive and to intervene in crisis situations.

For their final meeting in D.C., the students visited the Smithsonian Institution’s National Air and Space Museum to speak with Roger Launius, associate director of Collections and Curatorial Affairs.

Launius described a big question that influences his work and the work of public diplomats: Is the responsibility of curators to present exhibits or programs that are more celebratory of our history or more critical? He also discussed the challenge of engaging museum audiences, the centrality of international politics to the inception and maintenance of the International Space Station, the political impetus for the Apollo 11 moon mission, and the national prestige associated with spaceflight achievements.

The MPD representatives thank professor Nick Cull and Dean Ernest J. Wilson III for their generous support of this trip, and professors Robert Banks and Geoffrey Cowan for connecting them with organizations in D.C. They also thank all the people they met in D.C., who gave them a unique perspective on the successes and challenges of public diplomacy across multiple sectors, and consistently emphasized the increasing importance of this field in creating a more peaceful world.