On May Day 2006 more than 500,000 people rallied in downtown Los Angeles for immigrant rights. Rogelio Alejandro Lopez, 19 at the time, attended the march with his mother and his younger sisters.

“That’s when I started really seeing the issues reflected in what I was doing and seeing myself personally in the kind of issues affecting my communities,” recalled Lopez, now a doctoral candidate in communication at USC Annenberg.

He and his family first entered the United States as undocumented immigrants. They eventually received sponsorship and Lopez was naturalized at 17, but he continued to view the world around him through the lens of sweeps, roundups and Immigration and Customs Enforcement (ICE) raids.

As an undergraduate, he studied Chicano/a studies at UCLA and got involved in “Fast for Our Future.” The hunger strike called on more than 1 million people to pledge to vote for immigrant rights during the ’08 presidential election.

After a few days, having not fully prepared, Lopez brought his fast to an end, but realized he could still be involved through media activism. This led him to examine the mechanisms that went into the campaign: how the organizers went about building it and how the media portrayed them.

“All of these pieces started to come together as I was taking courses centered around social movements at the same time as social media was becoming popular for young people,” Lopez said.

This realization became the foundation of his ongoing research, which focuses on how youth use media to get involved politically through activism, social movements and civic engagement.

As a master’s student in comparative media studies at the Massachusetts Institute of Technology (MIT), Lopez expanded his work to document how major news outlets are framing the immigration debate. He wanted to know how the media’s depiction of organizers, movements and protests affect the way that activists themselves develop their talking points, shift the conversation and broaden the issue.

Lopez was able to meet people from all over the country who were using the Internet to connect local issues to a national arena. “It was inspiring for me as a researcher and I knew I wanted to pursue a career in research — so I applied to USC,” he said. 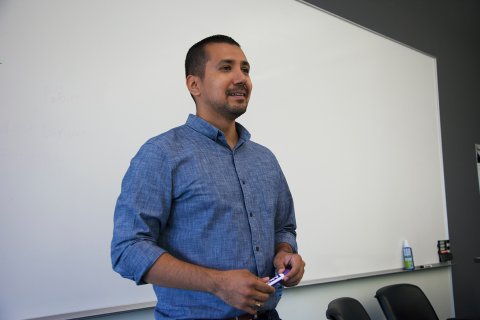 “In order to change the world, you have to begin to imagine it differently, and for a lot of young people,” Lopez said, “part of seeing themselves in that narrative of social change, begins with that process of imagination.”
Photo by: Olivia Mowry
For Lopez, having scholars at USC Annenberg who also examine what it means to be involved politically with communication — and to look at different cultural dimensions of how to be involved civically — was key.

“I wanted to work with Henry Jenkins whose concept of participatory politics promotes this idea that young people do care about issues, and how they are getting involved is through these different methods of information sharing and community building,” he said.

Lopez, now in the fourth year of his doctoral program, is researching the March for Our Lives youth movement and incorporating previous work he has done around immigrant rights and Black Lives Matter. He is looking into how these groups are using specific media narratives and communication methods to achieve their goals.

“We need to understand the interplay between the types of media strategies that movements develop, the broader players in the ecology and how that affects how we understand issues as a public,” he said.

As part of his field work, over the course of five days, Lopez served as a participant observer at several tour stops for the March for Our Lives “Road to Change” campaign. Lopez studied how these young leaders used their platform to talk to local communities, and weave topics of representation, race and social issues into their messaging.

“Talking to people who were at Marjory Stoneman Douglas High School at the time of the shooting, or meeting families who are torn apart because of immigration policies,” Lopez said, “I find myself trying to find the balance between my role as a researcher versus my role as an empathetic human.”

In addition to researching and teaching at USC Annenberg, Lopez is also involved with Civic Paths. He, along with a group of faculty and fellow graduate students, take on different initiatives to explore continuities between online participatory culture and civic engagement. In the Civic Imagination Project, Lopez and his collaborators ask youth to place themselves in storylines as agents for social change. Students are encouraged to re-conceptualize the world they want to see in the future and how ultimately these visions can inform real action.

Post-doctorate, Lopez would like to keep working to empower young people.

“I hold youth development deeply in my heart,” he said. “I would like to be involved in that type of work — it is really inspiring for me to see young people reaffirm themselves through different rallies and protests. It is incredibly powerful.”