Since the USC Annenberg media center opened in 2014, the 22,000-square-foot, glass-walled production hub has helped students create a flood of inspired multimedia content. With its recording studios, cameras, control rooms and green screens, the center seems to have everything an aspiring storyteller could want.

Now, just in time for the 2018 election season, it has something new: a politics desk.

Annenberg Media, the multi-platform student newsroom that operates out of the media center, is organized into a number of desks, including the Global City desk, the PR desk and a number of specialty desks.

When Christina Bellantoni left the Los Angeles Times to become the media center’s new director in August, she was a bit surprised that politics didn’t have its own editor and reporting team. But after the media center held its open house at the start of the fall semester, she learned that the students themselves wanted to change that.

“There was an enthusiasm for creating a politics desk,” Bellantoni said. “In response to that student demand, we started putting together a sort of last-minute, all-volunteer, ragtag team.” 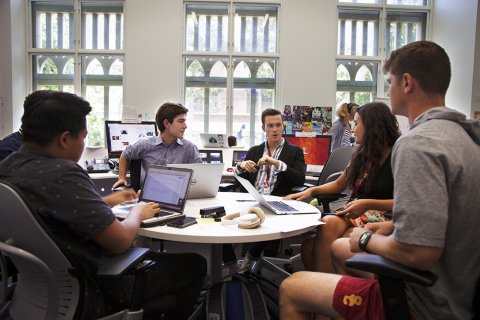 The new politics desk in the USC Annenberg media center.
Photo by: Ashley Dizon
Dan Toomey ’20, a broadcast journalism major and one of four managing editors for Annenberg Media, spearheaded the drive to create the desk — six weeks after every other desk had already been assigned and staffed up. The first step was to find a politics editor, and Toomey knew he didn’t have time to mess around.

“I basically gathered a list every political group at USC, found their contact information, sent out a massive email and did social promotion,” Toomey said of the editor search. “We even sent our news anchors to classes.”

He emphasizes that the recruitment campaign was not confined to USC Annenberg students. “One thing that I really see as a priority as a managing editor is getting students into the media center who are not only journalism, public relations or communication majors,” he said.

On Sept. 13, the politics editor position ultimately went to just such a student: Austin Peay ’20, a double major in law, history and culture and classics from USC Dornsife College of Letters, Arts and Sciences. “I’m obsessed with politics and have been for years,” Peay said. “Anything I’ve ever done in politics — whether that’s voter registration, working the polls, being a phone banker for candidates — is about having people know what’s going on in Washington or in their local government. And from there, making an informed decision.”

When it comes to the coverage USC can expect from the politics desk, Peay said he plans to cover several politically-minded guest speakers on campus in the coming weeks, among other events.

“My big thing is helping USC students know what’s going on in Los Angeles, so they can make decisions based on that knowledge,” he said. “There’s a governor’s election this year, and there's a lot of House of Representatives districts around here that will be critical to which party controls Congress.”

As with the vast majority of the content coming out of the media center — whether it be text, audio, video, social or a combination — the work of the politics desk will be produced, edited and distributed by the students themselves, with USC Annenberg faculty acting in an advisory role, sharing their experience and insights with them.

“Given that the majority of my experience in newsrooms was covering politics, particularly in Washington, I feel very glad that I can be of help,” Bellantoni said.