Inside the classrooms at USC Annenberg, students are the ones typically tasked with answering the hard hitting questions. "Five Minutes with..." turns the table on faculty members to ask them the questions. 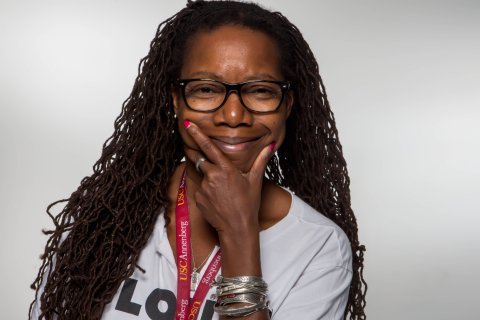 Courtesy of Miki Turner
Turner, an award-winning photojournalist who also teaches the subject at USC Annenberg, was selected from artists around the world to showcase her photography at the prestigious event, which runs from Oct. 17-25.

Participants are chosen by an international selection committee, which begins making decisions more than a year in advance. This year’s artists represent more than 50 countries, including 45 participants from the United States, and a variety of artistic media such as painting, sculpture, jewelry and digital art.

USC Annenberg sat down with Turner before the festival to talk about her exhibition, how she plans to integrate the experience into her teaching, and the way she'll be checking in on her classes virtually while she's abroad.

How will you be participating in the Florence Biennale?

Essentially I have two prints in the photography component of the exposition. It’s an international art fair for people to show their work, display their work, sell their work if necessary, and for some emerging artists to get more recognition. It is in some circles considered a prelude to the Venice Biennale, which is the big one, probably the most impressive one in the world, so I’m excited to have been invited.

How did you find out that you were selected to attend?

I just got this letter, I was doing this series called the Commuter Series, which are these black-and-white photos of me on my train ride [to USC], so I would just shoot random people and random things. And there was this woman who was, I guess she was getting ready to get off the train and she had a bunch of shopping bags, and that’s the photo that was sent to me, and they said ‘Hey, we’d like to invite you.’  I’ve done exhibitions before but I’ve never really been invited to be a part of one, I’ve just done them on my own, or with someone else, so that was kind of exciting.

Which photographs are you exhibiting?

I’m using something called Abaya Road, which is something I shot in Saudi Arabia, and then I’m using something else I shot in South Africa called Zulu Eyes, which I really didn’t want to use, but all of the people around me said, ‘Oh, you’ve got to use this.’ For me it’s one of my most iconic and recognizable shots, and I’ve used this kid so much, he’s on the cover of one of my books, he’s the cover of my website, so I’m tired of the kid, but everybody else said ‘no, no, no, we love this shot.’ So those were the two I picked. 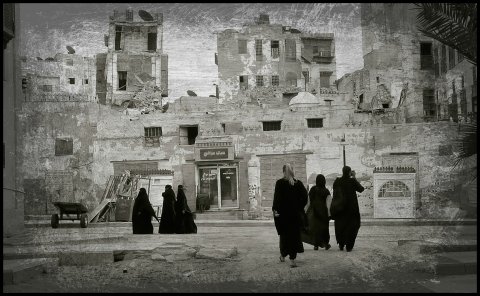 'Abaya Road' is one of the two photos Turner exhibited at the Florence Biennale.

Is there anything you’re hoping to bring back to your classes at USC?

I haven’t been to Florence in about 15 years, so I’m hoping to take some better shots because last time I was there we were still using film. I wanted to go into the countryside and capture some of that, but I don’t know what the weather is going to dictate, whether or not I'll be able to do that. But certainly bring back some landscapes and use those as a teaching tool. And you know, there’s so many iconic landmarks in and around Florence, like all of the churches, the Il Duomo, so hopefully a little bit of architecture, a little bit of landscape, stuff that we normally don’t work on a lot in class.

What are you most looking forward to about the festival?

This exhibition thing is not something that’s really part of my career path. This is kind of the first time I’ve been involved in something like this, so I’m excited to see how people respond to the work, because we’re our own worst critics. So, like I said, I really didn’t want to use the kid but I’m excited to see how people respond to Zulu Eyes and if in fact that was something I should have brought, or maybe not. If people do actually respond to the work then maybe that will encourage me to do some more exhibitions of this type, but I’m just excited to show the work, see other people’s work, and engage in the community that I don’t normally engage in with other artists and photographers because I never really get that chance. And hopefully in Florence this time I’ll be able to get some better shots than I did the first time. I don’t get an opportunity to shoot as much as I’d like because I’m always busy here, so hopefully that’ll happen. I’m gonna Skype in from there to my class, I have my classes being covered by other people but I'm just going to Skype in to say, 'Hey, look!'

What role did USC Annenberg play in helping you to achieve this?

I really have to thank Willow Bay [Director of the School of Journalism] and Deb Lawler, who were the first to step up with some financial assistance, and my other sponsors — ADEX International of Cincinnati, some friends from Saudi Arabia and a small group of US friends. It's really great when other people are inspired to support you. And I was in [professor] Erna Smith's office when I first got the news, so she's a part of this, too. Love, love, love my Annenberg peeps!

This interview has been edited for length and clarity.