“I think what I’ve learned from working on Moonlight is, we see what happens when you persecute people,” Mahershala Ali said as he accepted the 2017 Screen Actors Guild Award for outstanding performance by a male actor in a supporting role.

Then he paused before continuing: “They fold into themselves.”

School of Communication Director Josh Kun returned to Ali’s memorable speech from the SAG Awards to begin their conversation in a packed Wallis Annenberg Hall Forum on April 18 as part of the USC Annenberg-HBO Diverse Voices Series.

“I thought we could start by talking about that moment and what that notion of ‘folding in’ means to you,” Kun said.

“When I think of myself and defining folding in, I know personally how that has helped with my work,” said Ali, a two-time Academy Award winner who was named among TIME’s most influential people of 2019. “It’s feeling, for many years, that I couldn't find a tribe until eventually I just owned it for myself and was totally cool with being a loner. And finding joy in really defining, or coming to, an identity for myself, by myself.”

Star of HBO’s third season of True Detective, Ali shared how he pitched the show’s creator and writer Nic Pizzolatto to cast him in the lead role of Detective Wayne Hays as well as broader insights into how he has refined his artistic craft while maintaining a deep sense of purpose and intentionality.

In Ali’s own words, here are five takeaways from his discussion with Kun, which was followed by an audience Q&A.

I read the first four scripts [for the supporting character Roland West in True Detective]…. And I went home and I had that gnawing feeling…. I was like, “No, I want to play this lead cop, Wayne. He’s extraordinary.”

My grandfather was a state police officer in the ’60s and ’70s in California…. I went and found pictures of my grandfather in his state police officer uniform and I sent them to Nic, the showrunner and creator, and I basically said, “Look, in a real way we basically existed in this space.” I said, “Look, if you had that lead cop in that position in 1980, I think it gives you this other element to your story that you can always weave in and out as you so choose…. I think it makes your story better.” He agreed and he said, “Fundamentally, it doesn’t change what I want to do with the character,” and if anything, he felt like it improved [the character].

I was like, “You know what happens? They’re not going, ‘I'm not answering you.’ They’re going, ‘Oh, I’m going to answer Roland.” They’re not looking at me. They are going to direct, “Oh, he must be in charge. He’s the white guy.” That’s what happens. I said, “If we can find a way to weave that in, that is more so how race is experienced.”

I feel like hope should be located within all of us, personally, because there is an Islamic teaching that peace exists between fear and hope. I think, for me, I have to do the work for myself, to nurture my hope and find inspiration from everything in my orbit. And there are things within my orbit that I obviously prioritize or hold closer, starting with my family and my daughter. But, at the end of the day, I believe it is my responsibility to nurture and curate my own hope, because otherwise, I would find myself putting that responsibility on somebody else, right?

It’s about being in contact with my creator, who is where that source and well of inspiration comes from. I personally put my problems on my prayer rug and my aspirations on my prayer rug. How I want to help to improve the world in my own little way — all those things I pray on. So, for me, that really starts with myself, not with any arrogance or ego, but just I think that’s my responsibility. 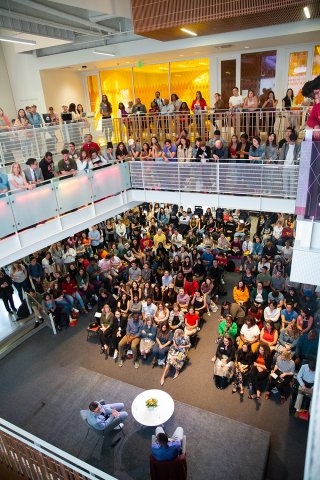 We have to have people of color in positions to tell a broader story, and one where they’re not always necessarily having to speak specifically to race. Sometimes a story about race is in who is creating the content, right? And that being in the story and part of it, as well, opposed to just hammering people over the head with some of the issues that are going on — which do need to be talked about, which we absolutely have to find our ways to weave them into our narratives and our stories. But it shouldn’t necessarily have to be that way 100 percent of the time, in my opinion.

I’ll never forget. It was 2000. I was right out of school. And I was playing a character based on Jack Johnson, first black heavyweight champ of the world in 1909…. So, I’d be in rehearsal three, four hours a day with these light boxing boots on…. What happens is when you’re acting and you’re nervous is you begin to stand on your tippy toes, right? And you begin to lose your connection with your roots, with the ground.

And so, I felt, emotionally, I would be more grounded if I had more weight. So, I was like, “Ah, I'm going to get some ankle weights.” […] So, I wore ankle weights for like three weeks in rehearsal. And every time I was doing these scenes, emotionally, I was just present in a way. And it was harder when I took off the weights…. Just how your mind, body works, the tension had to relax, and I felt released. I felt more open, and my voice would drop, with the ankle weights on….

So, as much as you have to observe, take in as much as you can, listen to teachers, throw out what really doesn't resonate for you for whatever reason, that you also have to keep digging and be on this search for yourself. And develop somewhat of a scientific relationship with acting, and just really understanding your own mind, body, as well.

You have to think about it from the standpoint of being fulfilled. And as you ask yourself, “What is it that is going to bring about a certain degree of fulfillment, from what I can understand at this point in my life right now, in this moment?” … Don’t give yourself a choice. Go for it. Put energy out there about it. And wait for the world, the universe, God, whatever you relate to, to respond and speak to you about it. And take the little victories. Really pay attention to those. Getting an internship. Getting your work done on time. Getting a paid job where you only got one roommate instead of two or three. Whatever the thing is, own those little victories. And let them stack up. Because you will feel successful and you will be successful, right?

And the things that don’t work ... You got all these little accomplishments lined up over here. We’re like, “I got rejected. That’s cool. I’m still working. I got my positive signs. I got my life signs for myself to tell me to keep going in this direction until told otherwise.” And your experiences may not even have to tell you otherwise. Because at a certain point, you may be like, “Man, I’ve been hitting my head on this wall for so long. The whole time, I actually wanted to be a writer.” And you may start writing. You never know.

But you have to go for it. You can’t give yourself a choice. Because, last time I checked, you don’t get to die and wake up and have another life tomorrow. You just don’t. So, make it your own. Own it. Live it. Experience it. Embrace it. And be an inspiration to somebody older and younger than you.