Jon Ward, chief national correspondent with Yahoo! News spoke to a group of students in the Sheindlin Forum on Nov. 9.
Photo by: Olivia Mowry
Critical Conversations

Jon Ward of Yahoo! News addresses the challenges of covering politics in a hyperpartisan era

If many political observers were surprised by Republican Glenn Youngkin’s victory in the Nov. 2 gubernatorial elections in Virginia, Jon Ward wasn’t one of them.

The veteran political journalist, now chief national correspondent for Yahoo! News, recalled attending a rally for Democratic candidate for governor Terry McAuliffe in Richmond, where the lead speaker was none other than former President Barack Obama. Even though the last gubernatorial race went to the Democrat, and President Biden had won the state easily in 2020, Ward noticed a tepid response to Obama’s visit.

“It was about 10 days out or so from Election Day, and it stood out to me that it was not a big event,” Ward told the audience in the packed Sheindlin Forum at Wallis Annenberg Hall on Nov. 9. “As we got closer to Election Day, it was clear that there was a lot more enthusiasm for the Republican.”

Ward’s talk was the latest in the R. Rebecca Donatelli Expert-in-Residence in Political Analysis and Media speaker series at USC Annenberg. Conceived to inspire students to enter the field of political media and bring experts to campus who focus on political communication, the series has resumed after the pandemic put it on hiatus last year.

While on campus, Ward held office hours and résumé-review sessions with nearly a dozen students, attended a morning news meeting of Annenberg Media student leaders and sat for newsmaker interviews with the Match Volume podcast, Annenberg Radio News and ATVN. Students working in the Annenberg Media newsroom also covered his panel as a news event.

In his conversation with students and moderator Christina Bellantoni, professor of professional practice and director of the media center, Ward shared insights about his career, the challenges of covering politics today, and why the next presidential election will be so consequential for the United States.

On what the Youngkin campaign in Virginia portends for the 2022 midterm elections and the 2024 Presidential election.

[Youngkin] kept Trump at arm’s length …  and yet there was higher turnout, all throughout the reddest parts of Virginia than there was even for Trump. … And he combined that with winning back voters in the Richmond and Northern Virginia suburbs and exurbs, and he won Virginia Beach, which Democrats had won in 2020. So, yeah, it's a recipe for Republicans to potentially follow.

To me, 2022 at this point is kind of a foregone conclusion: I think Republicans are going to take back the House [of Representatives], and maybe the Senate. But the bigger question for me is, what does it mean for the 2024 Presidential? And what does it mean for the Republican Party? Is it the first step of a path for Republicans towards a non-Trump future? Or does it just sort of encourage Trump and Trumpism to come back stronger than ever? I think that's an open question right now.

On covering politics when some Republicans denounce accurate reporting as “fake news.” 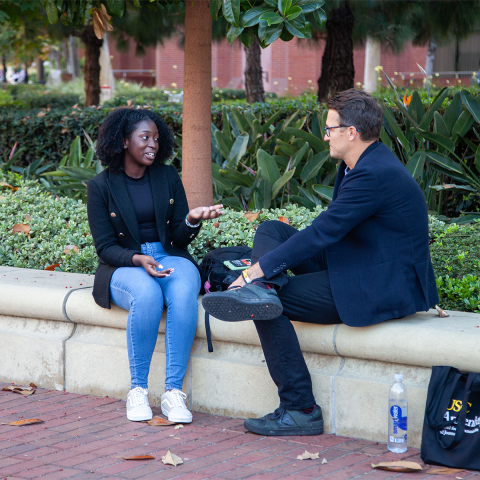 Jon Ward spoke to MS journalism master's student Hajah Bah during a one-on-one session while he was on campus.
Photo by Olivia Mowry
I did an interview with Susan Glasser [of the New Yorker] … and we talked about the ways in which it was getting increasingly harder to cover Republicans because they were further and further violating the whole idea of truth-telling, and even pretending to have allegiance to facts. And when that happens, it puts you [as a journalist] in such an adversarial position that, even to report facts, basic facts, it allows them to kind of say … that you're being partisan. And you know, that has had a personal cost for me. I've had family members call me names and impugn my character because of my basic duty to my job, and duty to try to tell the truth.

On why political journalism is important in an era of fragmented media and hyperpartisanship.

A lot of it comes back to what our motivation is as journalists. I think if we're motivated by a desire for public service and to serve the reader … that will help us do work that is better at keeping power accountable. It’s easy to write stories that are buzzy or viral or “pop” or whatever — lowest-common-denominator, outrage-machine-type stuff. … It’s hard to write stuff that gets into complexity and nuance and digs into things that people don't want you to know. All of the things that are really hard to do — those are the things that serve the public.