Kyle Le on location in Trinidad as part of his capstone project in the master of science in digital social media program.
Photo courtesy: Kyle Le
Career Paths

“One day I received a message on Facebook from a woman in the United States writing, ‘I'm looking for my lost sister. I haven’t spoken to her in 10 years,’” said Le, a Vietnamese-American originally from Orange County. “I’m thinking, ‘Okay, why don’t you just fly to Vietnam and look for her? What am I supposed to do?’ Nobody has ever asked me to do this before, but she kept at it.”

Thinking it was a prank, Le figured he could end the exchange by requesting the money he would need to hire a car and driver to find the missing sister. When the woman sent the money a few hours later, he realized he had no choice but to go.

“I never really expected to find anybody,” he said, instead imagining that this wild goose chase would be “a funny video.” He arrived in the woman’s hometown, a little outside of Saigon, in the pouring rain. He started asking around: One person led to another, who led to another — until he found the woman’s sister’s husband. Le went to their house, talked to the long-lost sister, and together they called her sister in America. 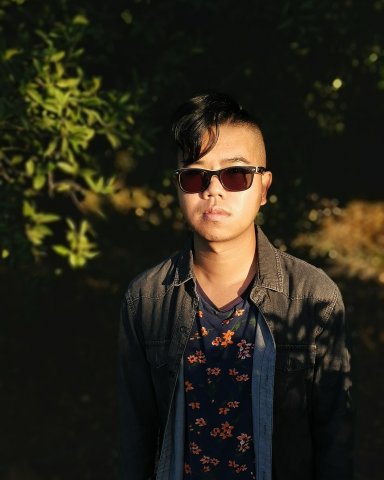 Photo courtesy: Kyle Le
Le had been filming the entire time. When he posted the reunion video on YouTube, the response led to more requests for family re-connections, which in turn set Le on a path to gaining almost 200,000 subscribers for his YouTube channel — and also to earning a master of science degree in digital social media from USC Annenberg.

Though he had visited Vietnam a few times as a child, Le truly fell in love with the country when he traveled there in 2010, the year before earning his undergraduate degree from California State University, Long Beach. Le then spent his senior year in college trying to figure out how to get back. When he overheard Vietnamese exchange students at CSULB switching between Vietnamese and English as they spoke, it hit him: He would go to Vietnam and teach.

Once Le arrived in Saigon in 2011, he spent his first few months sleeping in someone’s kitchen until he got a job teaching high school history and was able to rent his own place. A few years later, he got a phone with better video capability and Le began using social media, YouTube in particular, to share some of his food and travel experiences with friends and family back home.

They weren’t the only ones who noticed his dispatches. A producer from the Travel Channel’s “Bizarre Foods” found Le’s channel and asked him to appear on the show. “Here's the guy [Andrew Zimmern] I watched when I was researching Vietnam stuff, and it was a big deal,” Le said. “I remember the director urging me to do more videos, be in front of the camera more. And I listened to them. A couple of months later I bought real equipment and microphones and got more serious.”

It was also about this time that Le slowly moved away from teaching toward filming content full-time. A few months later, that fateful Facebook message appeared in his inbox. The first reunion video led to many more in Vietnam itself, and also in other communities in the Vietnamese diaspora around the world. He ended up visiting over 42 countries, documenting these new friends in such countries as Denmark, Germany, Belarus, Ecuador and Senegal.

“I knew that I couldn't do this forever because there were only so many countries and so many opportunities to film,” Le said. “Finding the people is one thing, but actually being able to go over there and get an honest interview and to do a really good documentary was really challenging. There was also the worry about where I’m going to live next.”

Heeding the advice of his grandfather, he returned to Southern California, starting the year-long USC Annenberg master’s program in digital social media in fall 2018.

“I was studying alongside a dynamic group of people from all walks of life, and because Annenberg has such a big international community, I was drawn to them,” he said. “Prior to this program, I didn’t have much organization or structure, so even though I have experience in social media, I learned different approaches and theories behind what I was doing and when I was posting.”

For his capstone project, Le once again did a reunion video, putting out a call to “see if there was anybody looking for somebody,” and if so, “hit him up.” A few days later, a 17-year-old adopted girl from Trinidad contacted Le looking to reunite with her birth family. She was living with her biological brother, but her biological parents (whom she had located) and other adopted biological siblings were scattered in different Canadian cities and she didn’t know how to go about setting up the reunion.

Working with Freddy Tran Nager, his advisor and the entrepreneurial communication expert in residence at USC Annenberg, Le went over his plan, wanting to “leave nothing to chance.” Le flew to Trinidad, where he met and interviewed the girl. He also released a vlog (video blog) to explain what he was doing and build excitement for the reunion. Having facilitated the reunion, Le filmed the siblings and birth parents all meeting for the first time.

“Roughly 300 subscribers watched and chatted with me and the adopted kids,” he said. “After about four or five days, it picked up momentum by appearing in many people’s recommended lists. I also made it a point to continue responding to the comments, which led to responses and more engagement.”

Even though he paid for the shoot and the plane fare himself, Le said he felt “more accomplished and satisfied knowing that my project has real-world ramifications and actually affects people online.”

With his degree in hand, Le is in talks to work on more scripted content, as well as the reunion-type documentaries. “The digital social media program allowed me to realize that, on a more professional level, I could use what I’ve learned in my experiences and apply it to a real work and life-experience role,” he said. “Before this, I feared making that jump from being an amateur to actually getting paid by a real company to doing exactly what I did for myself.”