On Aug. 8, USC Annenberg alumna Rachel Scott reached a career milestone that only a select few journalists ever attain: For the first time as an official White House correspondent, she asked a direct question of the president of the United States. 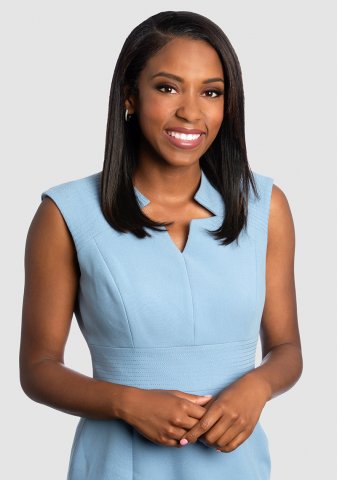 Rachel Scott.
Photo courtesy of Rachel Scott
At an impromptu press conference at President Donald Trump’s National Golf Club in Bedminster, New Jersey, Scott, who had been named an ABC News White House correspondent on July 20, asked the president to comment on what date Americans would see the COVID-19 relief he was promising to provide by executive order.

“‘Very soon?’ Thirty million Americans are out of work, sir,” Scott pressed. The president moved on to other questions without giving a specific date. To date, no such relief has been delivered.

If Scott’s life and career have taught her anything, it’s that she has a responsibility to ask tough questions of those in power.

“We’re there on behalf of the American people,” the Southern California native said. “There’s such value in not only having a seat inside that press briefing room, and being able to ask the president questions, but also to be out on the other side of the White House gates talking to Americans who are being affected by the economic turmoil, by the pandemic, by the racial strife in America.”

Scott credits her father, a police officer with the Los Angeles Police Department, for sparking her interest in journalism.

“He is such an avid consumer of news,” she said. “Sundays in my household were spent watching 60 Minutes and the nightly news and getting pop quizzes on what was happening, not only in America, but internationally.”

Her grandparents also inspired her to learn more about history, and how history is told.

“My grandmother participated in the March on Washington, so I grew up hearing stories about civil rights,” Scott said. “My grandfather was the son of farmers; his grandparents were the last generation of my family born into slavery. For so long, I heard so many stories from him about spaces and places that he could not exist in because he was a Black man in America. I always wanted to learn more about civil rights, about communities that were fighting for equality — and to be able to pose questions about those issues to people that are in power. That’s how I realized that I wanted to be a journalist.”

Growing up in Los Angeles, Scott zeroed in on USC Annenberg as the place where she wanted to develop her skills as a reporter and storyteller.

“At Annenberg, you learn how to do everything, every single skillset,” said Scott, who earned a bachelor’s degree in journalism in 2015. “I remember being in front of the camera, anchoring, going out and shooting my own stories, setting up the tripod as a one-man band coming back and writing a story for the online digital version, doing a voiceover for radio. All those skillsets are easily transferable when you make your way into a newsroom.”

Scott had an opportunity to embark on her newsroom journey when, during her senior year, James Goldston, president of ABC News, came into the USC Annenberg’s Media Center on a tour with USC Annenberg Dean Willow Bay while Scott was working there. At the end of the tour, she asked him about an entry-level job.

“Having the opportunity to directly pitch yourself to the president of a news organization — those opportunities are rare for student journalists,” Scott said. “Annenberg gives you that face-to-face time with movers and shakers, with innovators, with leaders in this industry.”

In this case, the connection paid off for Scott — but her early duties as a production associate in New York City were hardly glamorous.

“I made the copies. I made the coffee,” she said. “During the 2016 election cycle, I was making briefing books and printing cards for anchors, ordering lunch and dinner, helping out in the control room and making graphics.”

Knowing that she would need to get on-camera experience, she volunteered to work weekends as an on-air reporter at an ABC affiliate in Connecticut. She worked Monday through Friday as a producer for GMA Digital, then commuted by train to New Haven and back every weekend. “That’s the hunger and the drive that you get from being an Annenberg grad: to constantly want to do better and learn as much as you can,” she said. 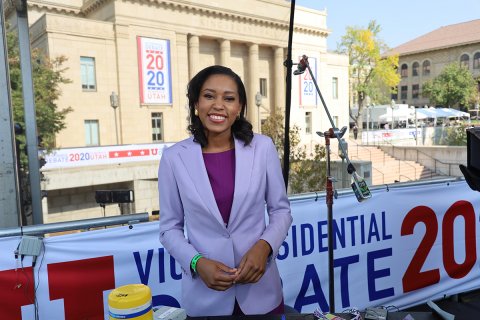 That drive earned her a position as a multi-platform reporter at the network itself, covering the 2018 midterm elections, Hurricane Irma, and the tornadoes that struck Alabama in 2019. This year, she has covered the nationwide protests against police brutality after the killing of George Floyd, as well as the COVID-19 pandemic and the presidential race between President Trump and former Vice President Joe Biden.

Now, as the White House correspondent, she is constantly having to adapt to the challenges of covering the presidency during a pandemic — including reporting on the president when he was diagnosed with COVID-19.

“After news broke of the president’s positive diagnosis, the next 24 hours and the days that followed all blended together,” Scott recalled. “’Round-the-clock live shots, press conferences, and plenty of cups of coffee as the list of those who were infected in the White House orbit grew by the hour.”

Scott was one of several White House correspondents outside Walter Reed National Military Medical Center in Bethesda who reported live the day the president landed there in Marine One. “It was a remarkable moment in history to not only witness firsthand but to report live in real-time to the American public,” she recalled.

Throughout all of the success and hard work of her young career, Scott has been an active and engaged alumna.

“There are so many alumni who saw my name in their inbox and hopped on the phone with me and gave me advice,” Scott said. “I owe so much to Annenberg that I jump at any opportunity to talk to a student, to talk to a class, talk to a seminar.”

Scott’s sense of duty to guide and support the Trojan Family mirrors her commitment to her civic duty as a working journalist covering the presidency.

“It is remarkable for me every day that I, as a Black woman, have a press badge to report from a White House that was built by slaves,” she said. “To be in that briefing room to be able to pose questions for the American people is a responsibility that I don’t take lightly.”

The National Association of Black Journalists (NABJ) named Rachel Scott the 2020 Emerging Journalist of the Year.