With many paths to service, Lieutenant Jack Tribolet found his passion and purpose flying MH-60S Knighthawk helicopters for the U.S. Navy. For the past nine years, he has experienced two deployments to Bahrain that focused on logistics and search and rescue missions.

Now, his leadership skills and devotion to duty have led him to the next chapter of his career as a master’s student in USC Annenberg’s public diplomacy program this Fall.

“Last year I won third place in an essay competition held by the Chief of Naval Operations and it motivated me to pursue a graduate degree,” Tribolet said. “The public diplomacy program caught my attention because it combines international relations and communication.”

As the only Navy pilot whose currently assigned to USC, Tribolet will also be an instructor for the highly competitive USC Navy ROTC program for which he will teach naval history and naval science, and help shape midshipmen into the next generation of officers.

“My goal is to instill leadership skills in a group of young men and women who will be expected to go out and lead sailors overseas once they graduate from USC,” Tribolet said. “These skills are difficult to grow, but I see it as a great challenge, along with balancing my own classwork and being a husband to my wife Tamaryn and a father to my one-year-old daughter, Brooklyn.”

Tribolet was born in Tucson, Ariz., but moved to Kauai, Hawaii, when he was 13 years old. As a fourth-generation pilot, he understands the sacrifice required to raise a family while pursuing his passions. He hopes to leave behind a powerful and positive legacy like that of his grandfather, a World War II Air Force pilot. 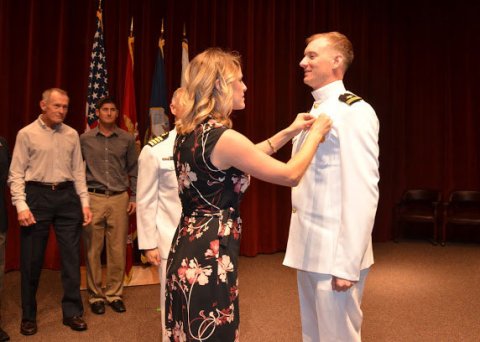 Jack Tribolet receives his aviator wings from his wife, Tamaryn, at a pinning ceremony during flight school graduation. (Photo: Courtesy of Jack Tribolet)

How did the U.S. Navy prepare you for higher education?

Well, I would compare flight school to earning a graduate degree. It is a challenging pursuit. You must be able to draw knowledge from paper, then apply it to working with your hands and implementing what you have learned. I have seen some intelligent people who are book-smart not be successful, and some people who are not extremely book-smart be successful. Just like graduate school, you are required to build new skills and learn at a fast pace. But the biggest difference is flight school has all-day classes with tests at the end. If you fail a test, you roll back and you can only fail twice before they just get rid of you. There's no mercy.

Why did you choose USC Annenberg?

USC will be my 11th duty station in nine years and as a naval officer, I always had hour-long flight briefs with a ton of information. I want to be able to translate these military skills and be able to present concisely and strengthen my ability to communicate beyond the flight deck.

I also look forward to having the opportunity to work with the different consulates and foreign contacts in Los Angeles. I hope to gain perspective on how others view the world. I am interested in diplomacy in the modern world and I would like to focus on Eastern Europe and the issues they face, and then bring my historical perspective to add insights to that.

What do you hope to do after you complete your graduate degree program?

I have another 11 years in the Navy and my ultimate goal is to teach history and international relations at the U.S. Naval Academy. I hope to institute my knowledge and experiences into future Navy service members, and then maybe even push on beyond that and have a career in academia as a civilian.

What are you most excited about for the Fall semester?

I am really looking forward to living in Los Angeles. I have lived in every corner of this country, which is one of the great benefits of being in the military. It gives you great perspective knowing and meeting people from all over. I have a friend in almost every single state.

So we have to ask, have you seen the new “Top Gun” movie? If so, what did you think of it?

I enjoyed it and, like the first movie, it’s a very effective visibility tool for the Navy. Many people want to be pilots. Before I was commissioned as an officer, I did two years enlisted working on F-18 Super Hornets like the ones in the “Top Gun” movie. I think the film did an excellent job of showing the pride of accomplishing something so challenging. It does in many cases require a certain kind of personality to want to do something so difficult. It is an honor to serve in naval aviation and I hope to help the next generation of future pilots from USC gain their wings.