Forbes names online graduate student to its “30 under 30” list

Every summer from the time he was seven through 16 years of age, Ernest Owens would travel from his hometown of Houston to Marianna, Arkansas, where he would spend three months with his grandmother. She had grown up in the small town just an hour and a half east of Little Rock and “knew her way around town,” Owens said. She could walk into any room — any situation — and leave with a new friend. This is what she wanted for her grandson.

“You can be the smartest person or the richest person in the world, but if people don’t like you, it doesn’t matter,” she told him. “If people don’t trust you or want to be around you, you aren’t useful.” This advice stuck with Owens and he spent those summers following her around to churches and retirement homes, meeting people, listening, interacting and building the kind of confidence and self-esteem that would stay with him throughout his academic life and career.

Currently enrolled in the online communication management master’s degree program, Owens, now an award-winning journalist, lives in Philadelphia. Though he started out as a political science major at the University of Pennsylvania, once he took some media classes and learned about the “power and responsibility” of the press, Owens switched to communication before his graduation in 2014.

“We live in a society that talks politics, entertainment, education and community affairs and what is missing are diverse voices, intersectional voices, young voices, queer voices,” he said. “I thought that was important to be a part of that change. When I was growing up, I never saw a black queer person that could talk about what it was like to live in this day and age.” 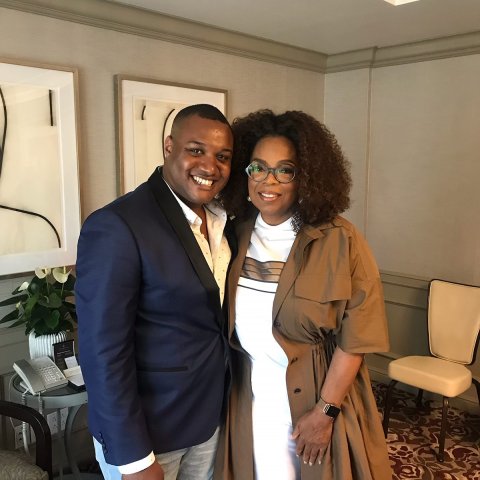 Ernest Owens with Oprah Winfrey after interviewing her in Hollywood.
Photo courtesy of: Ernest Owens
Upon graduation, Owens started to make a reputation for himself as both a writer and a multimedia content provider. He started out as a freelancer, writing opinion pieces for Metro, a free daily newspaper in Philadelphia. His first op-ed piece was about his personal experiences of racial discrimination in the LGBTQ community. This led to a larger conversation in the Philadelphia area about discrimination and Owens was offered a position as the LGBTQ editor at Philadelphia Magazine. “I started interviewing people, doing some investigative research and reporting,” he said. “That really became the catalyst for the kind of journalism that I’ve always wanted to do — and the kind of stories that just weren't being told anywhere else.”

In 2018, Owens founded his own business, Ernest Media Empire, LLC. At about the same time, he decided to go back to school to earn his master’s degree. He applied to the online communication management program at USC Annenberg because he was looking for a program that would “enhance his leadership skills,” he said. He started in Fall of 2019. As for why he chose an online program, “I couldn’t imagine sitting in a classroom and carving out that kind of time because news is breaking all the time and I’m part of it,” he said. Owens also found the flexibility of an online program gave him the ability to apply what he was learning immediately to the work that he was doing.

“I think this program takes you from being a doer to an expert. I wanted to be a champion. I wanted to be a leader,” Owens said. “I feel like the program is structured in a way that, ‘This person not only knows how to do this, but they know how to lead this.’ And that's the difference. And that was why this was a worthwhile investment.”

While taking courses, Owens has continued building his media business and his social media following, reaching more than seventeen-thousand followers on Twitter. He’s producing video content, podcasts, and has made television appearances. He caught the eye of the judges at Forbes — who named Owens to their annual “30 under 30” list in late 2019.

Owens also got engaged last Christmas Eve and is planning to marry after he graduates from the program in 2021. As for his professional goals after that, he said his current work is already his “dream job.”

“I want to do what I'm currently doing now,” he said. “I just want to just do more of it.”