A bustling Trojan Family Weekend saw USC Annenberg host a series of talks around campus. On Oct. 12 in the packed Sheindlin Forum, parents had the opportunity to hear a spirited discussion among Ben Carrington, associate professor of sociology and journalism, and three panelists, including two adjunct professors and a parent, titled, “Game Face: The rise of athlete activism.” 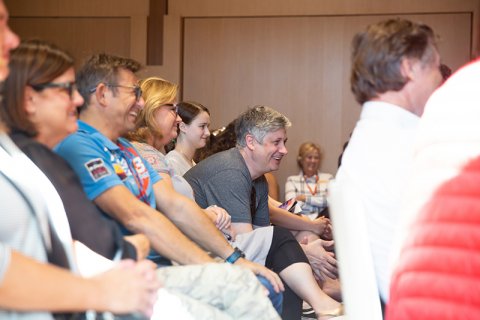 Packed room of parents and families in the Sheidlin Forum.
Photo by: Katie Chin

Carrington set up the conversation by noting that socially conscious athletes have become more prevalent in the United States. For example, both LeBron James opening up the Promise School in his hometown of Akron, Ohio, and Colin Kaepernick’s kneeling protest before NFL games raised awareness of racial discrimination and racial inequities. “Nowadays, athletes not speaking out would be surprising,” Carrington said.

He also drew the audience’s attention to what we might learn by looking at sports from a historical lens. One of the first questions Carrington asked was, “Is the rise in consciousness really new, or are we simply paying more attention?”

What followed was a deep dive into the effectiveness of athlete activism and the power athletes have to spark dialogue. For the next hour, the panelists explored the broader implications of the athlete’s role in the public sphere and what this means for the future of sports media and culture.

“The notion that athletes never had opinions is false. They’ve always had opinions about what’s going on socially, domestically and internationally; [athletes] just didn’t feel comfortable enough to speak out. They were afraid of retaliation based on what they had seen in the past.”

“We’re in a new era now where athletes have the most social and economic power they’ve ever had, and part of that has to do with social media. There’s a level of transparency that has never existed before. Athletes actually now feel comfortable saying what's on their minds and speaking out. They have enough stability, both financially and socially, that they are willing to speak up regardless of what the consequences might be.”

“I think athletes should always use their voice if they feel something is wrong. I am always surprised how people get upset when an athlete brings attention to an issue and the plight some people are in. The purpose of speaking out is to move people, and bring awareness to injustices.”

“I think all athletes have a lot of power when they are in it together. If you are against bad things happening, be it black or white, why aren’t you involved and why would you excuse yourself? When you splinter, the same things reoccur.”

“Social issues have always changed because people were willing to take a stand or to do something they believed in — athletes included.” 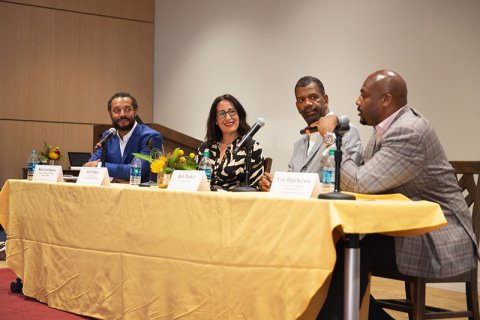 “In today’s world, athletes have a platform that you can't really replicate in general society and so, those athletes almost have a responsibility to weigh in on particular subjects that are of interest to them.”

“When talking about the historical context at this moment — what is new and distinct, is that the platform is different. The social consciousness is heightened. The advent of social media makes access so much easier — the average citizen is plugged into the debate in a different way than they used to be.”

“Going back to Muhammad Ali, people were observing what he did, but there wasn't this free-flowing debate with an athlete. Whereas today, with social media, you can have one-on-one dialogue with the athlete in the moment, and they're reacting to your comment.”

“We looked up to our athletes in the past. We used to watch them — they were heroes of ours, but they didn’t feel attainable. Now, we are paying attention and we’re seeing how they are shaping economies. Athletes are saying to themselves, ‘I get things moving. I’m investing in the communities that I came from to make people feel like that their future is possible based on the contributions that I’ve made — not as an athlete, but as an owner of a sports team and as an owner of a business.’ Athletes have transformed who they are, as well and where they used to be. They’re brands within themselves and so now they have that platform. They have that power and more and more, they feel that sense of responsibility to give back to the community.”