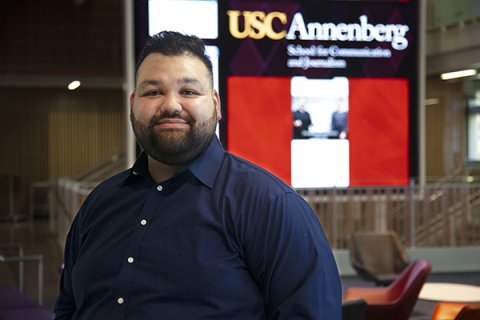 Ignacio Cruz, a Ph.D. candidate in communications.
Photo by: Olivia Mowry
With another holiday season upon us, lots of eager fingers will be unwrapping the latest mass-market technological marvel: a smart speaker system. The number of homes in the United States with an Amazon Echo, Google Home or other such device reached 50 million this year, according to an August report by the research group CIRP. As people interact more and more with these digital assistants, what effect will that have on how we interact with each other?

Two USC Annenberg doctoral candidates are exploring this 21st-century question with some good old-fashioned controlled lab experiments. Sonia Jawaid Shaikh and Ignacio Cruz, both communication Ph.D. candidates, knew that more and more people are forming opinions about the devices, both positive and negative. However, for their study, “‘Alexa, do you know anything?’ The effects of intelligent personal assistants in teams,” Shaikh and Cruz were after data not opinions.

“Just saying that a new technology is good or bad doesn’t make sense — you have to contextualize it,” Shaikh said. “So, we created a setting within which we investigated, empirically, the impact of using artificial intelligence technology.”

For their study, they recruited 56 two-person teams of USC students to engage in a creative task: planning a Sweet 16 birthday party. Some teams had access to an Amazon Echo’s Alexa, some did not. The other variable was time. Some teams had 15 minutes to complete the task, others had 30 minutes. 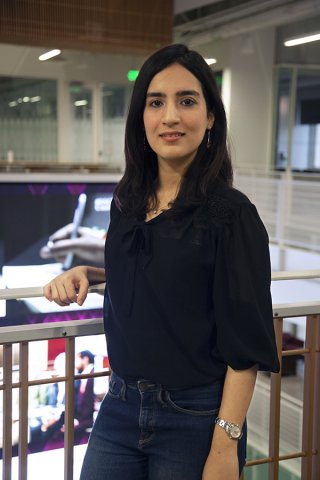 Shaikh and Cruz wanted to see what effect Alexa had on the team members’ collaboration. “Being able to put that aspect of an emerging new technology into a team dynamic was really interesting,” Cruz said. “We believe our study could be the first of its kind to do that.”

The researchers found that people interacted less with each other when the machine was available to them. “They requested help from Alexa more when they were under time scarcity,” Shaikh noted. “Those people who had a lot of time used Alexa in the first few minutes, and then didn’t use it as much later in the task.” Shaikh and Cruz called the increased reliance on Alexa when under time pressure “dependence on the more-intelligent other.”

This study grew out of both Ph.D. candidates’ respective lines of research. “I’ve always been interested in organizations and how people use technology in the workplace,” Cruz said. “The consumer market is constantly changing, and these new technologies bring in a level of interaction that’s different from a desktop software program.”

Shaikh, for her part, has focused on the effect scarcity of resources has on decision-making, and how emerging technologies shape that process as well. For instance, she noticed how the research team she was on behaved around technology — including how Google Drive and continually updated records can affect deadline-setting.

Their work earned Top Student Paper and Top-Three Paper awards at the National Communication Association Convention in November. While the pair prepare the final version of their paper for publication next year, they are already thinking about what next steps might be. Shaikh said that they want to try creating different tasks with larger group sizes.

“It will also be interesting, down the road, to research how this technology is used in its intended setting, both in the home and in the workplace,” Cruz said “Do people change the way they interact with it? What other dynamics come into play? When we do the experiment in the lab, we control for a lot of things, and that's how we're able to collect this great data.”