In a warm, carnival-like atmosphere with candy, games, and colored ice, the annual Taste of Annenberg event welcomed new students with a smorgasbord of free food and opportunities to get involved in clubs and activities.

Held on August 20, the Taste of Annenberg encourages new students to become involved by offering a one-stop introduction to USC Annenberg’s clubs, media outlets, and faculty research projects. This year’s event kicked off with the new undergraduate interdisciplinary assembly in the ASC auditorium, followed by food and games accompanying an involvement fair in Founder’s Park. 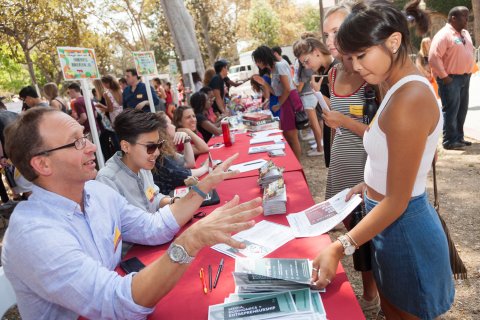 Professor Gabriel Kahn talks to a student at the M{2e} table at the involvement fair during Taste of Annenberg.
USC Annenberg/Brett Van Ort

Geehee Shin, a master’s student in public diplomacy, stood in line for Rita’s Italian Ice in the warm sun, surrounded by the colorful, noisy hubbub of her peers and professors. Having arrived 10 days earlier from her home in South Korea, Shin said that she looked forward to the opportunity to mingle.

“It just gives us opportunities to interact with other students, undergraduate students also. And professors,” Shin said. “So I think it’s just a really fun way to get to know how to begin the school and the semester in a very fun way.”

The sea of new faces included students from all walks of life. Rafael Hilaril, a junior-year transfer student studying communication, said he grew up in the neighborhood. He worked his way to USC Annenberg after serving in the Marine Corp.

“Actually I’ve been working for it since the beginning of community college,” Hilaril said. “After I got out of the military, I knew I wanted to go to USC.”

For the undergraduates like Hilaril, the morning included an assembly led by Dean Ernest J. Wilson III designed to introduce faculty from both the Communication and Journalism Schools to the students.

“We are probably the most interdisciplinary school on this campus. We have a broad range of classes you can take,” Sarah Banet-Weiser, director of the School for Communication, told the first-year and transfer students.

“Be sure that you use your resources here,” she said.

Professors were given a few minutes each to pitch their classes and research to the undergraduate audience. Sensitive to the fact that students wouldn’t have room in their schedule for every class, many faculty members offered clubs as an alternative means for students to learn desirable skills.

Robert Hernandez, professor of digital journalism, presented Nerd Club for those who want to learn digital skills. “No matter what your focus here at Annenberg, we want your digital skills to be above the industry,” Hernandez said.

The undergraduates were also invited to become a part of of the team at research centers on campus. Professor Stacy Smith, director of the Media, Diversity, and Social Change Institute (MDSCI) invited students to be “part of the solution” to Hollywood’s lack of racial and gender diversity.

“Every year we work with about 100 undergraduate and graduate students who drive our research team,” she said. “The heart of everything we do — by, for, and about — is our student researchers.”

“It’s clear that this is an amazing faculty,” Wilson said. “This is why we’re one of the best schools in the world. Because we have the best faculty in the world.” 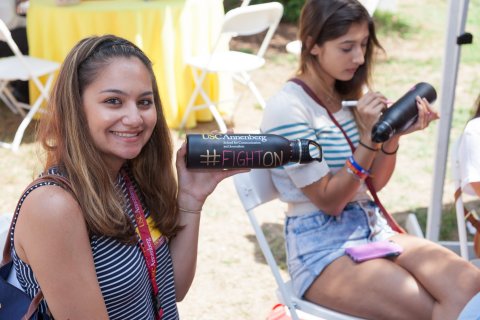 Rashid Binnur, a freshman in public relations from San Diego, said that his interest lies in politics and public diplomacy. But the presentation by professor Gabe Kahn, director of the Media, Economics and Entrepreneurship program M{2e}, enticed him to the M{2e} table.

“I wasn’t sure if I wanted to minor in business, but after I heard [about the M{2e}  program], I think I want to do that. Because I’m interested in the business side of media and PR,” Binnur said.

Others were swayed more by passion than by business. Tara Ruff, a sophomore transfer student studying broadcast journalism, started the day interested in television platforms, like Annenberg TV News. But she was also intrigued by Smith’s invitation to join MDSCI.

“[Stacy Smith’s] one about diversity and gender, like how women and certain races are least represented, that really stood out to me,” Ruff said. “I’d really like to get involved in something like that and stand up for women.”

Vanessa Le, a freshman studying public relations said she was impressed that the activities and clubs weren’t siloed in the USC Annenberg School, but connected with different schools across campus. For a first-year student, the diversity available offered the opportunity to grow and find new interests.

Le said, “I definitely wanted to get involved in the Annenberg community, and just explore new interests and things I didn’t get to do back in high school.”

Is This Digital Era Affecting Journalistic Objectivity?
Unfortunate Uber: Uber in China and Europe
Dropping the “R” from Influencer Marketing
Pinterest’s New Lens Feature is the Future
What We Missed from the Pepsi Fiasco: Social Justice and Education in Social Media
It’s 3:30pm. Why are you still in your pajamas!
Social Search: Can Snapchat Win Where Facebook Lost?
Seven Magic Words For Better Communication
Something About My life-The Fusion of North American and Asian Cultures