Hundreds of students, faculty, friends of USC and a core of international press gathered at USC’s Town and Gown on Nov. 6 to hear A conversation with Ma Ying-jeou. The former president of the Republic of China (Taiwan), hosted by the USC Center on Public Diplomacy (CPD) at the Annenberg School, spoke to the crowd and participated in a Q&A with Dean Willow Bay.

Professor Jay Wang, CPD director, introduced the forum: “What better way to understand global engagement than to have someone whose eight-year presidency was dedicated toward advancing peaceful relations in one of the most dynamic and volatile regions?” 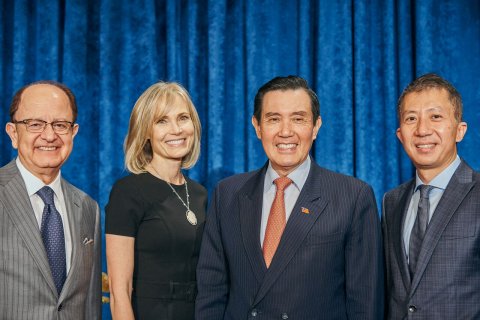 “For Dr. Ma,” said President Nikias, “Taiwan is in his heart. During his presidency, his greatest commitment was his pledge to strengthen international relations and create mutually beneficial relationships with Taiwan’s neighbors.”

President Ma’s roots are truly international. He was born in Hong Kong but grew up in Taiwan and later served in the Marines and the Navy. He received his degrees from National Taiwan University, New York University and Harvard Law School. He excelled in a range of key roles in the government, from the Presidential Office’s First Bureau to the Justice Ministry.

Ma spoke to his USC audience about how Taiwan’s trade relations with mainland China are stronger than ever, and account for nearly double the amount of trade Taiwan has with every other country. However, the journey from blood to harmony, he said, “wasn’t easy.” Ma shared the story of the 68-year volatile relationship between mainland China and Taiwan from the Battle of Guningtou to the 1992 consensus, part of the cross-strait reconciliation policy with mainland China.

Ma finally had the opportunity to leave his mark on Cross-Strait relations in 2008, with his three-no policy: “No independence, no reunification, no use of force.” In his eight years as Taiwan’s President, Ma would oversee 23 agreements between Taiwan and mainland China — which placed Cross-Strait relations at the best they’ve ever been. Today, Ma likens the Taiwan Strait to a “boulevard of peace and prosperity.” 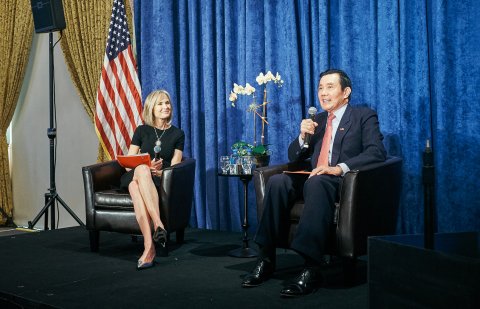 USC Annenberg Dean Willow Bay interviews former President of Taiwan Dr. Ma Ying-jeou.
Photo courtesy of: USC Center on Public Diplomacy
After his speech, Dean Bay posed several questions to Ma — ranging from the current relationship between the U.S. and China to how Ma positions himself politically, now that he is out of office.

“What role,” she asked, “can you play in engineering change? What levels of power, diplomatic or otherwise — and are there people or nations who can assist you?”

“Ever since I stepped down as president, I try to be as silent as possible,” Ma responded.

“This is just the political ethics. Now that I’m no longer the president, I can’t force anyone to do anything. I can’t even ask my wife to do anything,” he joked, drawing laughter from the sea of students in his audience. “But what I can do is, I could share my experiences, either it’s successful or it’s not successful, and people, including the current administration, could use that as a reference.

“Or I could come to a country, a university like USC, to give a speech.”

As the event came to a close, Iris (Xinlu) Cai ’18, an international student from China who grew up during President Ma’s leadership, had the chance to ask a question about Cross-Strait relations. Afterwards Cai, who is currently majoring in international relations (global business), discussed how rewarding it was to get a better understanding of his perspective. “I feel it’s really important for both sides of the straits to understand each other’s opinions and maintain a peaceful relationship between the island and mainland. To be able to attend this event was really exciting for me.”

The USC Center on Public Diplomacy (CPD) was established in 2003 as a partnership between the Annenberg School for Communication and Journalism and the School of International Relations at the University of Southern California. It is a research, analysis and professional education organization dedicated to furthering the study and practice of global public engagement and cultural relations. As part of the center, practitioners of public diplomacy aim to foster mutual trust and productive relationships, through educational exchange programs and cultural diplomacy.