USC Annenberg doctoral students were funded by Summer Research Fellowships to pursue independent research over the summer of 2015. Students worked individually and in teams to study topics as varied as the activist hashtag #ReclaimMLK, dating apps, Obamacare, and the California drought. Their fellowships enabled them to travel, gather data, and interview subjects. Here is what they worked on and how they used their fellowship funds, in their own words:

Emma Bloomfield (ABD)
"Discursive exploration of the human origins controversy: A cluster-agon analysis of a Reasons to Believe online course"

Using a cluster-agon method, I analyzed the discourse of Reasons to Believe, a religious organization that offers online science courses. I argued that in combining science and religion as compatible ways of knowing, Reasons to Believe had to construct a new discursive hierarchy. This research has implications for new iterations of religious rhetoric and religion’s attempts to adapt to the dominance of scientific discourse. With funding from the Summer Research Fellowship, I was able to afford enrolling in the online course and ordering course materials. I also had the support of Annenberg in presenting my research to the school.

Transportation Network Companies (TNCs) have drawn both praise and vitriol in the popular press, but little research has been done to better understand worker experiences and motivations. Through participant-observation with drivers and interviews with labor organizers, this study sheds light on the rapidly growing TNC sector from a labor perspective. Contrary to the polarizing rhetoric about TNCs, drivers exhibit a much more ambivalent mindset. They are drawn to the flexibility and low barriers to entry, but remain cognizant of their lack of agency and precarity. These push-pull dynamics appear to be particularly strong among immigrants and traditionally disadvantaged populations.

This award helped me take more than 50 rides with TNC drivers and talk to them about their experiences and how driving fits into their lives. It also enabled me to conduct interviews with labor leaders in Los Angeles and Seattle.

Lik Sam Chan (Third Year)
"Predicting the Intent to Use Dating Apps to Look for Romance and Sex: Using the Integrative Model of Behavioral Prediction"

The integrative model of behavioral prediction (IMBP) states that any behavioral intent is directly determined by the attitude toward, perceived norm, and self-efficacy of carrying out the behavior, and indirectly determined by some background variables. I tested two models—Romance and Casual Sex. Results were general consistent with the IMBP, except no relationship was found between the perceived norm and intent in the Sex model. Some background variables were also found to have a direct effect on the intent. The summer fellowship allowed me to make use of the Qualtrics Panel Service, which collected data from over 400 participants for my study! 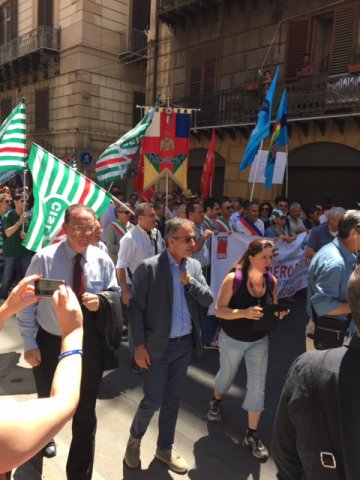 My summer fellowship enabled me to research and write the journal article ‘The Tourist’s Real Sicily: Mobility and Identity in Food and Virtual Markets.’ This project explored the exchange of food and information as interfaces between the ‘tourist’ and ‘local’ identities. These two identities are often understood oppositionally in the global digital age, with the ‘tourist’ subject imbued with qualities of mobility and cosmopolitanism that are dependent on the assumed or forced stasis and premodern construction of the ‘local’ subject. This distinction is often exaggerated in the food context, where concepts such as slow food, open-air markets and traditional food production are fetishized as objects and ideas for consumption by the tourist.

The Annenberg summer fellowship allowed me to explore these concepts using the case study of the Ballaro food markets in Palermo, Sicily. Drawing on my own subject position as a tourist, I found that the architecture of the open air food market encouraged flows of people and food that complicated the tourist/local binary and turned tourists themselves into a static object of spectacle. 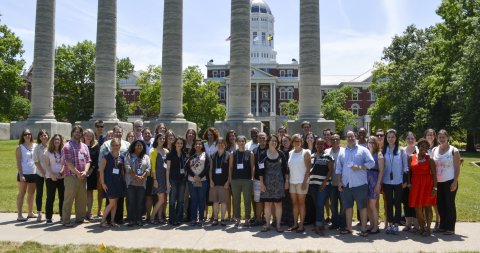 Participants of the NCA Doctoral Honors Seminar at the University of Missouri in July 2015.
Traci Gillig

The project I conducted with support from the Annenberg Summer Fellowship involved the use of an online quasi-experiment to explore the reactions of youth to a televised storyline involving two gay adolescent characters, which was depicted on the Freeform (formerly ABCFamily) show The Fosters. Prior to this, conversations with the writers and director of the show took place, as did exploratory focus groups with LGBTQ and heterosexual/cisgender youth.

The fellowship allowed me to have “hands-on” experience leading a research project during my first year of doctoral studies, which has been an important learning opportunity. The work-in-progress was also accepted for the NCA Doctoral Honors Seminar in July, and the feedback and support from the faculty mentors there was invaluable. 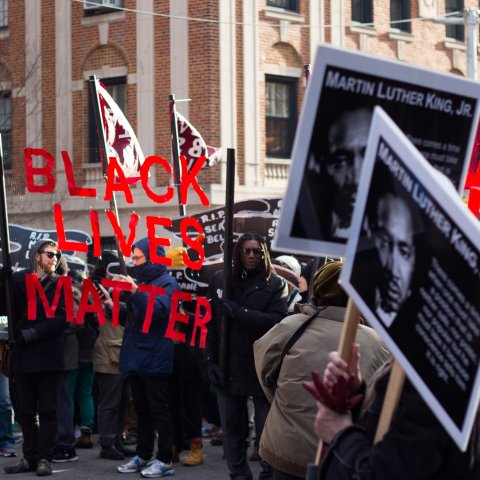 A multi-phase, mixed-methods study investigating the activist hashtag, #ReclaimMLK, which circulated on Twitter in conjunction with the 2015 Martin Luther King, Jr. national holiday. Research examined the role of Twitter for users who engaged with #ReclaimMLK, including types of tweet content, Twitter user characteristics, and offline activist practices. Findings suggest the inclusion of multimedia significantly predicts the number of times a tweet is retweeted, and there is a heavy overlap between #ReclaimMLK participants’ use of Twitter for activist-related causes and involvement with traditional repertoires of contention. Together, our findings challenge pessimistic notions of “slacktivism,” and present an alternative and positive interpretation of online activist engagement. 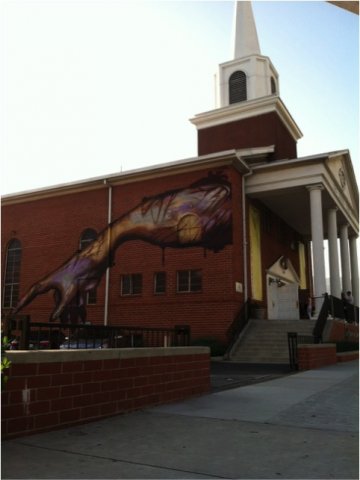 Addison Shockley (Fourth Year)
"Rhetoric, Place, and Conversion: A Study of the Intersections Among Physical and Spiritual Conversion Narratives" 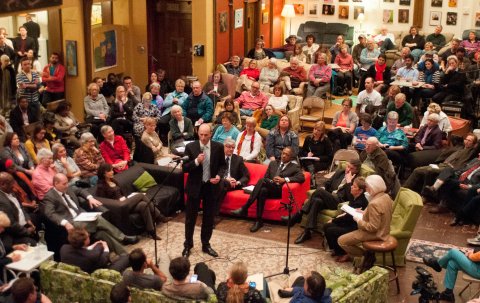 Solomon's Porch in Minneapolis, Minnesota, where pews were removed and replaced with couches.
Addison Shockley

The summer fellowship enabled me to travel and perform interviews, document sites, and purchase documents which I would not otherwise have been able to afford.

Self-Affirmation Theory posits that thoughts and actions that affirm an important aspect of the self-concept can make people more susceptible to change by casting their self in a positive light. With support from the Summer Research Fellowship, we conducted an online experiment assessing effects of self-affirmation in the context of the ongoing California drought. Two studies have already emerged from the data. Results of the first study indicate that, relative to non-affirmed participants, self-affirmed participants reported higher levels of support for water conservation policies, as well as sustained reduction of water use over 30 days. The second study found that self-affirmed participants engaged in more interpersonal discussion and information seeking behaviors than non-affirmed participants, which in turn increased knowledge about the drought and water-conserving behaviors.

This research was only possible with funding and support from the Summer Research Fellowship, which allowed for the collection of rich longitudinal data over the course of a month. Results are now yielding multiple studies that advance theoretical understanding of self-affirmation processes as well as indicate practical implications for addressing societal risks and collective concerns.

Cynthia Wang (ABD)
"Health Practitioners’ Use of Communication Technologies and its Impact on Temporal Patterns, Organizations, and Structures"

This summer, I conducted a survey and a number of interviews to interrogate how the use of communication technologies and mobile devices by health practitioners, particularly attending and resident physicians and nurses impact the temporal organization of their day, both at and away from work. The main finding here is that communication technologies allow for practitioners to be more flexible with their time throughout the day, to communicate to colleagues more efficiently via personal mobile devices and text messaging through “institutionally sanctioned” means like the paging system, and to use electronic medical records (EMRs) from home, liberating work from a physical location. They are also able to use mobile devices to fill “interstitial” time, or time spent waiting (i.e., waiting for an operating room to be ready for the next patient), and can also stay connected to friends and family outside of work better, blurring the (rapidly fading) line between work and non-work time, communication, and activities.

The fellowship allowed me to conduct a survey and incentivize people to take it, via gift cards. Many respondents were appreciative. What is also interesting to note, though, is that a surprising number of people did not want to leave their email for a gift card, perhaps to ensure complete anonymity with the survey. I’ve noticed that when asked about using smartphones for non-work related activities at work, people would sometimes get a bit dodgy…