Second year doctoral student joan miller, with summer funding from the Annenberg School of Communication and the USC Graduate School, was able to get her feet wet this July as a fan-slash-ethnographer at the 47th annual Comic-Con International.

Held over four days every summer at the San Diego Convention Center, Comic-Con is, as miller says, the “granddaddy of all comic cons” in the U.S. More than 100,000 fans and creators connect at panels, booths, and parties. Far from being limited to comics alone, Comic-Con has expanded to cover nearly every nook and cranny of popular culture.

Since 2007, Matthew Smith, a professor at Wittenberg University in Ohio, has organized the Experience at Comic-Con, which offers students the opportunity to attend the Con as both fans and as researchers. The program culminates with the Comics Arts Conference, where participants are able to present the work they’ve done over the past several days. miller’s Annenberg advisor, Henry Jenkins, initially put her in touch with Professor Smith.

miller wasn't completely new to the convention scene. She’d attended the New York Comic Con while attending NYU, and made Stan Lee’s Comikaze her “home convention” when she moved to Los Angeles a year ago to start the Annenberg doctoral program. This past March, she attended WonderCon at the LA Convention Center. But she’d never been to San Diego Comic-Con. The Experience at Comic-Con program helped make that happen.

"These days it's near impossible to get into Comic-Con unless you've already been there, so the first amazing thing this program did was get me in the door," miller said.

The goal of the program was to offer students an opportunity to study fan culture via ethnography, or the study of a group of people or a culture. miller said she’d done some ethnographic research in the past, but that her previous writing always had a generous helping of memoir included.

"I like to stand with one foot on either side of the line between memoir and ethnography,” she said, “a perspective I developed during a class with Dr. Deborah Kapchan at NYU Tisch. We talked a lot about what our work should do, for whom, and why.”

miller sees Comic-Con as more than a yearly spectacle and wants to share “con culture” with people who might not know anything about fandom or conventions. So approaching her writing as both a researcher and as a participant is a strategic choice.

"I aim to bring that message to a wide audience, so I’d like my work to be accessible and enjoyable to a non-academic reader,” she said. 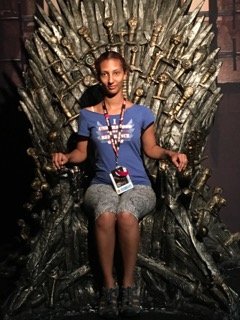 Asked if it's difficult for her to separate fandom and academia, particularly in a charged environment like Comic-Con, miller’s answer is an emphatic no. Because she doesn’t want those two sides of her to be separate.

"I make no attempt to separate the two. I think being a fan makes me a good researcher, and being a researcher is part of makes me enjoy being a fan. It’s a fine line between arguing about Superman vs. Batman and Hegel vs. Marx,” miller said, making the point that in some ways, all academic writing might be considered fandom writing.

Pop culture fandoms have traditionally been built and nurtured by fans who aren’t just passive viewers, but who are creators in their own right, critiquing, building on, and remixing the worlds and characters they love in television shows, movies, comic books, and more. So the leap to fandom academia for miller and others like her isn’t quite as big as you might think.

"The fan in me participates while the researcher in me observes--and, when I'm good, takes notes," said miller.

miller arrived at Comic-Con with one topic in mind, but through her interactions there, found herself drawn to something else.

"I went into the convention thinking that I would be writing about diversity and inclusion at Comic-Con. The topic has been close to my heart since my first convention and I’ve written about aspects of it—cosplaying, particularly—before,” she said. “However, I found that my most interesting moments at the con came in mundane interactions between myself and other fans whilst waiting for something.”

This led her to focus her work on the easy camaraderie and friendship that can quickly develop around a shared passion. Normally introverted, miller says that she made it a point to talk to everyone and that she found it relatively easy to strike up a conversation with fellow con-goers. She found her feelings and her topic summed up by someone she met: “When I go to Comic-Con it’s like being at a party with 150,000 of my closest friends.”

While every summer brings a slew of stories in the press about Comic-Con, reporting on Hollywood blockbuster casting or the latest trailer or the wild array of costumes that dedicated cosplayers have whipped up, miller found herself wondering about the other 361 days of the year, asking, “For whom does the con linger? Or, for whom is this more than just an exciting weekend getaway?”

In addition to getting to know fellow fans, whether it be through bonding over Game of Thrones theories or trusting a stranger in a long line with twenty dollars to buy her a much coveted Funko Pop vinyl figure, miller also made it a point to talk to people who make Comic-Con run behind the scenes. 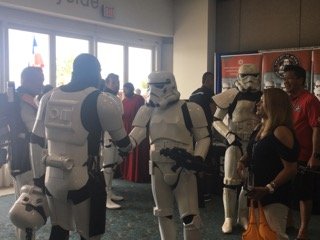 While miller's experience at her first San Diego Comic-Con was good, she recognizes that there can be a dark side to fandoms and conventions and hopes that her work might help to change that.

Describing her positive experiences with fellow fans as commonplace, she added, “That isn’t to say there aren’t nasty interactions at cons. Certainly, I hope my research can contribute to minimizing or eradicating problems with racism, sexism and other exclusionary practices.”

miller hopes to use her trip to Comic-Con this summer as the first step to further research. She’d like to participate in the program again and said, “I also hope to use this preliminary work as a springboard into a long-form convention ethnography, possibly as my dissertation project.”

Like many doctoral students, miller's summer research experience is powering her work back at Annenberg.

"I'm entertaining an ideaabout starting a convention focused on celebrating artists and characters of color, possibly in collaboration with the Institute for Diversity and Empowerment at Annenberg,” said miller, who also participated in the IDEA Summer Doctoral Institute in June.

Ultimately, miller will continue to blend research with creative fandom.

"For me, the same passion and curiosity that makes me an active fan is at the heart of my research and I need both to succeed at what I'm attempting."