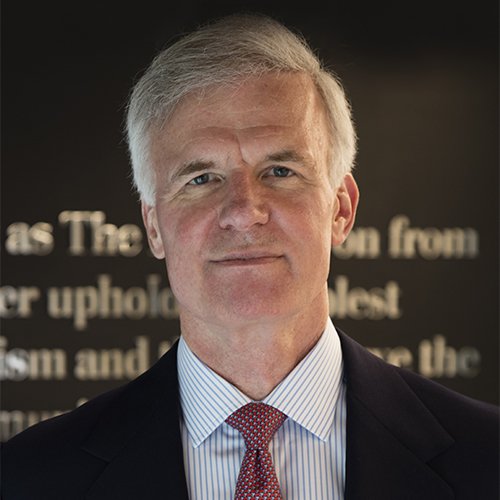 Publisher and CEO, The Washington Post; Board of Councilors, USC Annenberg

Frederick J. Ryan, Jr. is publisher and CEO of The Washington Post and affiliated publishing businesses. During his time at The Washington Post, it has been recognized for excellence in journalism with multiple Pulitzer Prizes and was twice named by Fast Company Magazine as the World’s Most Innovative Media Company.

Until August 2014, he served as president and CEO of POLITICO, which he co-founded in 2007.

From 1995–2014, Ryan was also president and COO of Allbritton Communications, a top performing and award-winning group of broadcast and cable television stations. Its ABC Network-affiliated stations ranged in market size from Washington, DC, to Charleston, SC. NewsChannel 8, its local cable channel serving Washington, Maryland and Virginia, became the most successful local news channel in America.

Ryan serves as Chairman of the White House Historical Association and the Ronald Reagan Presidential Library Foundation, and Co-Chair of the National Archives Advisory Committee on Presidential Libraries. He serves on the Board of several other nonprofit organizations including the University of Southern California, Ford’s Theatre, The National Geographic Society, National Geographic Partners, The National Museum of American History, the Metropolitan Club of Washington, DC, and the USC Annenberg School for Communication and Journalism.

Ryan served at a senior level in the White House from 1982–1989 and later became chief of staff to former President Ronald Reagan. He was responsible for overseeing all of former President Reagan’s activities, including domestic and international issues, government relations, political affairs and public relations. He was instrumental in the design, construction and funding of the Reagan Presidential Library.

He resides in the Washington area with his wife Genevieve McSweeney Ryan and their three daughters.