“At Risk in the Trump Era,” a four-month investigation by USC Annenberg advanced radio students, explores how vulnerable communities across Southern California react to the first months of Donald Trump’s presidency. The series profiles individuals burdened by new worries — looking for work, signing up for school, or even deciding whether to publicly express their sexual orientation or religious affiliation.

The team of young reporters were guided by USC Annenberg professor Sandy Tolan and adjunct instructor Karen Lowe, both veteran public radio journalists. They worked closely with The California Report Magazine’s host Sasha Khokha, along with the show’s Senior Editor Victoria Mauleón, to document the fears, challenges and opportunities facing many Southern Californians. 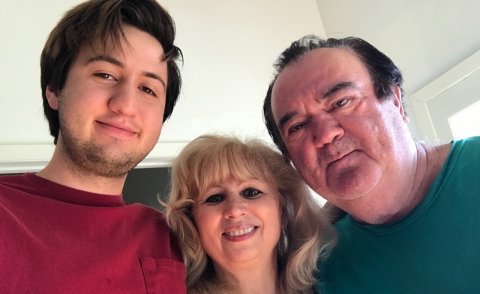 Olive, a 22-year-old transgender woman, with her parents, both of whom are Trump supporters. The family was profiled by USC Annenberg student Renee Gross.
Photo courtesy of Olive
Reporters in the Public Radio Documentary class “embedded” with several community members: a transgender woman whose parents are staunch Trump supporters; a Muslim woman who, in fear, removed her hijab and started taking a self-defense class; and a rock band transformed by the new political landscape. The first piece, “Undocumented Love,” by reporter and USC Annenberg fellow Paola Mardo, tells the story of Filipino high school sweethearts whose twisted path brought them together after nearly four decades apart. Now, they’re both grappling with the vulnerability of being undocumented as Trump steps up immigration enforcement.

“Our partnership with The California Report offers students a unique opportunity to tell stories that matter deeply, and it provides California Report listeners fresh, compelling journalism from our young reporters,” said Willow Bay, director of the USC Annenberg School of Journalism. “Allowing the coverage to unfold over several months brings a depth and rigor to these reports, and we’re proud of the powerful human stories these journalists uncovered.”

In-depth reporting throughout the semester allowed the USC Annenberg students to explore more deeply the daily lives of these individuals to get an understanding of the challenges they now face. The result is a trove of intimate, sound-rich stories that probe beneath the surface, Tolan said.

“Each of these students spent weeks, sometimes months with the individuals whose stories they’re telling. These young reporters demonstrate the potential and power of narrative storytelling,” he said.

The steady contact between the students and the people they were profiling created a sense of trust, Lowe said. "That trust led to some truly jaw-dropping moments."

“At Risk” marks the fourth major collaboration between USC Annenberg and The California Report, each built around a central theme.

“It’s been inspiring to work with these emerging journalists who offer new perspectives and approaches to storytelling,” said The California Report’s Victoria Mauleon. “We’re looking forward to hearing more from them on our air.”

For aspiring public radio journalists, the series was an opportunity to witness a professional collaboration from the inside, over the four-month period. Reporters have offered up an immersive experience for the audience. Text stories will live on The California Report website, and “At Risk” stories also will be released as a one-hour documentary, to be distributed nationally on PRX, the Public Radio Exchange, this summer.

“Having the opportunity to spend months on reporting this story and working with my professors, producers and peers taught me so much about the power of long-form audio journalism,” said Mardo, reporter for the inaugural “At Risk” story.  “I’m really proud of the stories we’ve produced and can’t wait to hear them on the air.”

The California Report Magazine airs on KPCC in Los Angeles on Saturday mornings at 6:30 a.m., and on two dozen other partner stations around the state each weekend. It’s also available as a podcast and archived for listening at californiareport.org.

About The California Report
Distributed by satellite from the KQED Public Radio studios in San Francisco, The California Report provides daily coverage of issues, trends and public policy decisions affecting California and its diverse population. It is carried by more than 30 public radio stations from Arcata to San Diego. Many local station reporters are regular contributors to the program. The daily morning edition of The California Report, a nine-minute program, brings news and analysis to Morning Edition listeners across the state. . The Friday afternoon edition, a half-hour magazine, provides in-depth analysis, sound-rich radio excursions and commentaries from voices around the state.