In the Annenberg Digital Lounge during spring break, the week of March 13, six students from USC Annenberg and neighboring universities presented non-narrated radio stories to each other after a weeklong project of gathering sound, interviews, writing and reporting.

This year, the theme was “First Days in America” and story ideas ranged from the Cuban immigrant who founded the popular Cuban bakery, Porto’s, to Afghan refugees re-settled in Westminster, Calif.

The six students, from USC, Cal State Long Beach, Cal State Northridge and UCLA, produced social media throughout the week, worked on a final radio piece, wrote a story for the web and received edits from managing editor of the project, Traci Tong.

“What I really wanted to accomplish was learning more about how to do field interviews,” she said.

She and her mentor, Susan Valot, a freelance public radio reporter and advisor for USC Annenberg’s radio program, went to Studio City to interview Fogelson. Her mentor’s feedback was helpful.

“It has been a really great experience to work with people in the business. I know what I know in radio but it’s extremely helpful when someone comes in and has other things to teach you or little tricks to get better audio,” De Leon Tzic said.

For Valot, it was exciting to see De Leon Tzic take part in the reporting process.

“I felt like a parent and thinking  ‘OK, have I told them everything they need to know?’”

Intisar Seraaj (Master of Journalism ‘17) interviewed a Haitian immigrant, Marmarah Similien, who came to the country at age 5. Seraaj has previous radio experience but said she usually struggles with getting natural sound.

“People say America is made of immigrants, so let’s really show that in the pieces we produce,” she said. “It’s not like she came here yesterday – they’re talking about memories, so you have to stretch your creativity.”

There are 11 Next Generation Radio radio projects this year, according to Doug Mitchell, project founder and director. Next Generation Radio was launched to reach out to students of color interested in public media. It started out as a side project for Mitchell, who was an NPR producer for various shows, including “Morning Edition,” and launched radio training projects at National Association of Black Journalists.

“There are lots of younger people who are interested in learning: ‘How did they do that? How did they produce it that way? How do I sound like NPR?’ That’s what we do,” Mitchell said.

Over the course of the week and afterward, student participants are supported in developing their creative toolset as journalists, cultural workers and storytellers, according to Taj Frazier, USC Annenberg Associate Professor of Communication and director of IDEA.

“My hope is that their skills are advanced by being able to shadow high-achieving and public service-oriented professionals who are passionate about increasing the public's awareness through different forms of storytelling, media, and critical insight,” Frazier said.

During the week, Amara Aguilar, Associate Professor of Professional Practice in digital journalism, looked over the web posts and helped get the stories ready for the website, along with Jenn de la Fuente and Carla Javier, who were also part of the web and social media team.

“What’s great is they are doing their audio story, but they are also developing elements across platforms and for social media,” Aguilar said. “They are producing content whether it’s on social or web posts.”

Traci Tong, who was the managing editor of the project, came up with the theme for this year’s project. Tong, who is one of the original and founding producers, is producer of The World — the co-production of the BBC World Service, PRI (Public Radio International) and WGBH.

She called the experience “invaluable” for the students.

“You have a chance to sit with someone and have them take you from this point to another point, whether you’re a beginner or advanced,” she said. “You can never be closed to learning new skills.”

For more photos please see below: 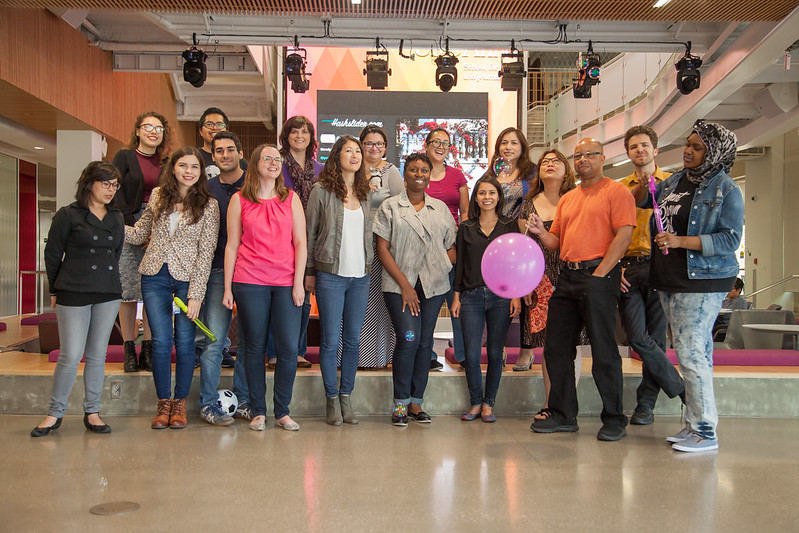 What We Missed from the Pepsi Fiasco: Social Justice and Education in Social Media
Photos: IDEA Art Activism and Global Solidarity
New Study: Aging Americans Snubbed in Best Picture Films
Annenberg Youth Academy for Media and Civic Engagement launches this summer, currently seeking applications
Five Minutes with Bill Celis: On embracing diversity initiatives and his new role at USC Annenberg
It Doesn’t Get Better: No change for female, black, or Asian film directors in a decade
Quoted: Stacy Smith on why 'Hidden Figures' is so important, and more
Communication leaders and experts discuss CPR's 2017 Relevance Report
Photos: Reel Change: The Struggles and Successes of Thwarting the Status Quo