For the past few years The Milken Institute has been choosing a select group of students to join their Tweet Force during their annual three-day Global Conference at the Beverly Wilshire Hotel.

The Milken Institute is an economic, non-partisan, think-tank that develops and publishes original research that aims to solve global problems. Each year they host their flagship event, The Global Conference, in which they gather thousands of the world’s leading professionals in a myriad of fields, in order to share and collaborate on policy changing topics. In order for the Institute to live tweet and cover all their panels, they invited a group of 13 students from USC Annenberg’s MSPR program to join their Tweet Force Team. As members of that team, we were in charge of live tweeting different panels and taking over some of the Milken Institute’s accounts to catch the speakers' best quotes and sayings.

Being a part of the Tweet Force requires us to handle challenges faced our way in real time. Capturing timely quotes while at the same time really listening to the conversation and understanding the context can become hectic. Sometimes panelists go off topic, or audience members ask questions that take the speakers on a different path than what the conversation was intended to communicate. But, a conversation entails that more than one person will get the opportunity to express their point of view, and so this means that, even if a topic has been planned, come the day of, circumstances and difference in opinions will likely turn the conversation into many different ways. This is not a negative aspect, it just means that, as a Tweet Force member, you have to be attentive and ready to continue putting out tweets that are cohesive and genuine to the conversation being had by the panelists.

Generating tweets might seem simple at first, but when you add time to the mix and eyes watching you, it can really get complicated. It's important to always remember to provide a link where people could watch the panel online, during the first introductory panel. It's also important to research the panelist's twitter accounts; Do they have one? How about their company? Is there handle similar to another persons? This last question was crucial, because sometimes, handles only differ from other handles by a single letter or symbol. You want to credit the right person. Maintaining your devices charged could also pose a threat. It was important for us to always identify the closest outlets to sit by in order to not run out of battery mid-way through a panel. Sometimes, other guests at panels would want to chat with you and ask about your Tweet Force job, distracting you from the speakers and from tweeting. But, most of the time, it was great to engage with other conference attendees and meet new people. 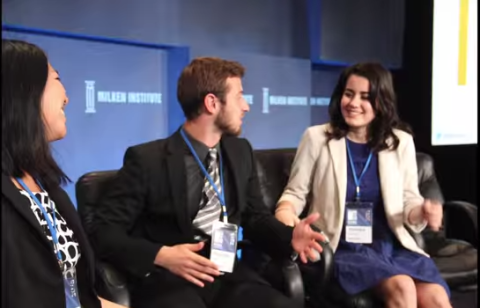 Justine Saquilayan, Alexander Wowra and Veronica Licha take a break from tweeting in order to discuss the day's best panels.
Courtesy of Matthew Leveque
The most important tool needed in order to avoid panicking and successfully cover a panel is communication between members. Computers might crash, you might be late to a session, a room is full, all these scenarios were encountered by members of the Tweet Force and the common solution was to contact one of our amazing supervisors, Bridget Wiegman and Trevor Steele (MSPR'13), and they would immediately work with you in order to find a quick and effective solution. Constant check-ins were perhaps the best way to communicate with the team; anything from technical problems to telling the group about your favorite panel and why it was special. These check-ins also served as a way for the Milken team to obtain real time feedback about their panels. Each member would state what they most liked and disliked about the panels they attended and the team would take that feedback into consideration for future events. It really felt like we were an integral part of the conference.

None of us would've gotten the opportunity to work with the Milken Institute if it wasn't for professor Matthew LeVeque and the incredible power of the Trojan Alumni Network. Le'Veque enabled us to step outside the academic comfort zone and into a fast paced, real world environment where our analytical and social media skills would be tested in ways that go beyond a letter grade. He was also a great mentor to have on the spot, as well as the proud photographer of the Tweet Force. 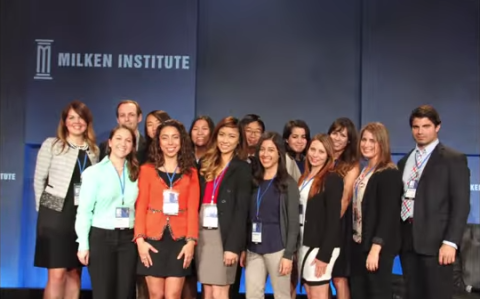 Part of the 2015 Tweet Force with the Milken Institute’s Bridget Wiegman and Trevor Steel, from the social media team.
Courtesy of Matthew Leveque
Besides getting to work for three days at an incredible and historic hotel, we got to be surrounded by the ultimate experts in an array of fields from technology and entrepreneurship, to finance and philanthropy. This meant that we also had the opportunity to see first hand some famous and familiar faces like Tony Blair, Adrian Grenier, our very own Willow Bay, and many, many more.

The insights we gathered from the conference were unlike any other. We learned a lot about the problems that exist around the globe, but even better also about the solutions. In many ways, the Global Conference was like a look into the future, or at least into the way life might be across the globe. Disruption was the theme at the forefront of most panels and with so many innovators and brilliant minds present, we learned more in these three days than in any classroom.

The theme of this conference didn't escape us. USC Annenberg is continuously trying to disrupt the communication and journalism industries by providing their students with unique experiences that bolster their skills. Being a part of the Milken Institute's Tweet Force gave us the opportunity to leave the Media Center and be treated as industry professionals who had the experience necessary to become partners with a Globally known non-profit. One of the best feelings we got, was seeing a tweet we put out get multiple re-tweets and comments from people that were following our feed in order to tune in to the panels through Twitter.

The opportunity to attend the Global Conference not only gave us an incredible three days full of unforgettable experiences, it also allowed us to get to know our class members more deeply. Although the conference pulled all the members in different directions, literally, it also brought us together in a surreal setting that allowed for genuine interactions amongst one another to talk about our interests and experience this unique adventure together. If you ever get the opportunity to apply to be a Tweet Force member, DO IT! It's an experience that holds a lot more weight than school credit and it allows you to network and be part of an exclusive team.

This post was written in collaboration with Alexander Wowra (M.A. Journalism, '15).