JOVRNALISM students use 360 video to report on deportation, immigration and border issues in Tijuana, Mexico

The current news cycle is filled with stories on immigration. Journalists are working to make sense of what it means when migrants to the U.S. are detained and then returned to a country they may have only seen as a small child.

Robert Hernandez, as part of his “Hands-on Disruption: Experimenting with Emerging Technologies” JOVRNALISM course, worked with students to help tell these stories. During spring break, Hernandez, associate professor of professional practice, led a small group of graduate and undergraduate students to Tijuana, Mexico where they were tasked with creating 360-degree videos. 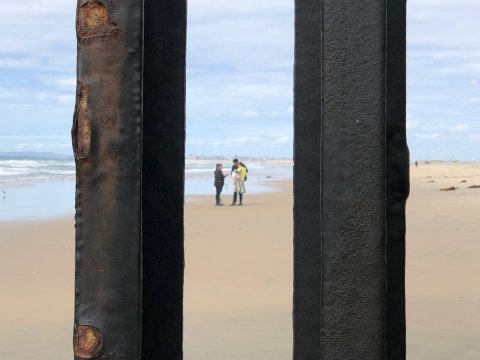 Helen Arase interviewing a family on the beach in Mexico.
Both USC Annenberg students and those from other schools across the university met with deportees, including U.S. veterans, religious leaders, families and children. Students visited the border entrance, places where the homeless congregated, sanctuaries for those seeking refuge, and a number of churches.

Jenny Hamel, a KCRW news reporter and producer, along with Caitlin Shamberg, their digital editor, joined the group. As a media partner, their goal was to help distribute and amplify the coverage.

Students created a website to view the five-part 360-degree video series: The Deported: Life Beyond the Border. In addition to KCRW, Jaunt, a leading immersive VR and AR company, and NPR published the pieces.

“Each person the students listened to,” Hernandez said, “made an impact on them. They gained a newfound understanding of their citizenship, their freedom and the opportunities they have as journalists to tell these types of stories.”

To experience their 360-degree videos, visit the website for The Deported by clicking here.