Organized by the Center on Public Diplomacy (CPD), the Nov. 17 panelists discussed the musical Come From Away, opening at the Ahmanson Theatre on Nov. 28.
Event Recaps

‘Come From Away’: Public diplomacy as both a science and an art

What happens when 6,595 people, 17 cats and dogs and two rare bonobo apes descend from the sky into Gander, a small town of 9,600 in Newfoundland, Canada? This is the basis of the musical Come From Away, opening at the Ahmanson Theatre in Los Angeles on Nov. 28. The play, set on Sept. 11, 2001 and the five days that follow, is a true story of the kindness of strangers and what transpired when 38 planes were diverted to Gander’s airport after the terrorist attacks on New York City and Washington, D.C. 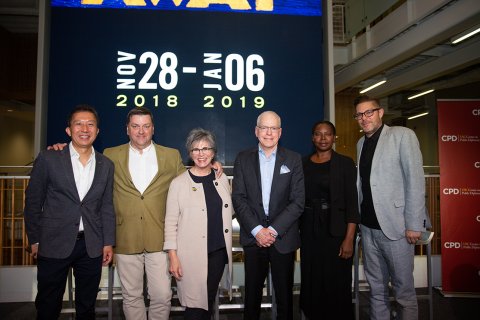 Come From Away speakers (L-R) Jay Wang, director, CPD; Percy Farwell, mayor of Gander; Cynthia Stroum ’72, producer; Douglas C. Baker, Center Theatre Group producing director; Jacqueline Lyanga, filmmaker; and Josh Kun, director, school of communication.
The Center on Public Diplomacy (CPD) at USC Annenberg hosted an event on Nov. 14 to talk about the play and its role in teaching the importance of public diplomacy. In his opening remarks, Jay Wang, the director of CPD, asked the audience, “You may ask why are we doing this program on a Broadway musical? Like any other communication discipline, public diplomacy is both a science and an art. We believe art is a potent narrative medium that reveals emotional truth and helps us to transcend the limitations of our imagination.”

The panel discussion was moderated by Josh Kun, director of the school of communication, and panelists included Percy Farwell, the current mayor of Gander; Douglas C. Baker, the Center Theatre Group’s producing director; filmmaker Jacqueline Lyanga; and Cynthia Stroum, one of the play’s producers, who graduated from USC Annenberg in 1972 with a bachelor’s degree in journalism and public relations.

Stroum, who is involved in theater production on Broadway, was initially not interested in producing the play, but after the first read/sing-through she “sat there crying. It gave me goosebumps,” she said. “When they were done, I literally said, ‘I’m in.’”

Stroum learned a little about public diplomacy during her time as the U.S. Ambassador to Luxembourg. She said she has brought the same passion to theater producing as she has to all of her other endeavors — including venture capital, chairing the Pancreatic Cancer Action Network, and working in television production. “What I've discovered about myself is, when looking at new projects or developing a show, I can't look at it like a writer or director would look at it, but I do know when I see something that moves me,” she said. “I’m a gut investor.”

Farwell, Gander’s mayor, spoke about the experience of their town “looking after the people as long as they were in Gander” and how public diplomacy played a part. “We actually receive emails from citizens of your country who have been becoming familiar with the story, wanting to reassure us that they appreciate us,” he told the audience. “It’s interesting that everyday citizens are actually engaged in communicating with us to express gratitude to our country. And if that is spread — at the ground level — I think that’s very, very effective diplomacy.”

“We see culture and the arts as a moderating force as we navigate this volatile world of extreme tendencies,” Wang said. “The story of Come from Away underscores the vital role of empathy in cultural encounters — an invaluable component for good public diplomacy anywhere.”