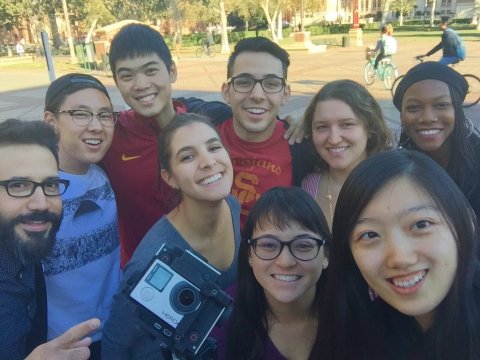 The junior print and digital journalism major said she had very little experience with VR, but she knew there was a lot of excitement surrounding the technology.

The course also piqued the interest of Crystal Goss, a senior broadcast and digital journalism major. Goss was most curious about how VR technology could be applied to journalism.

Because VR is a relatively unexplored medium, the class, JOUR 499: Special Topics – Creating on Emerging Technologies (VR Journalism), is structured different than most.

“This is not a class where there is a textbook that has all the answers and there’ll be a final that reviews all the things I’ve taught,” Hernandez said.

It operates much like a hackathon would, he added. The class is made up of students from a variety of academic backgrounds — journalism, public relations, cinematic arts, game design and a number of others. In fact, he interviewed every student prior to the start of the course to ensure that the class had the right skillset. The students also were also expected to be fully committed to the course and furthering their understanding of the technology from beginning to end.

Early in the semester, many of the students worked on their first VR project, a tour of Wallis Annenberg Hall. The video was show shown at the Online News Association conference in September using Google Cardboard.

Since then, the video has been viewed over 49,000 times on YouTube.

While the virtual tour was not a required component of the class, a number of students from the class were involved and got invaluable experience that furthered the work they did in class throughout the semester.

The class worked on VR projects all together and in smaller groups, for which Hernandez paired people who had complementary abilities.

“Everyone has found their own niche in the class and we've found a way to take advantage of everyone's different skills,” Coyle said.

For one of the first assignments in the course, Hernandez teamed up with four different media companies — Los Angeles Times, NBCLA, Reported.ly and WBUR. Groups of students interviewed the companies and brainstormed ideas for how each one could utilize VR content.

Because each media company is different, the assignment forced students “to think in nontraditional ways,” Hernandez said.

While there are many ways to utilize VR, Hernandez felt that video stories were the best way to familiarize the students with the technology. He had them pitch story ideas, and as a class, they selected several to work on.

Over the course of the semester, they’ve completed several stories surrounding the theme of action sports. The students covered a lucha libre fighting event, a women’s roller derby league and a CicLAvia event.

For CicLAvia, which encourages vibrant public spaces by eliminating car traffic from a number of Los Angeles streets for a day, Coyle, Goss and Nathalia Tavares rode their bikes and filmed the event with GoPros that were strung together to capture video from every angle.

“It was an idea I had that I thought would be fun to experience in VR,” Goss said.

Toward the end of the semester, the class also worked on data visualizations, which aim to convey information more effectively by placing the user inside the presentation of data.

While none of the projects have gone without a hitch, Hernandez said his intention for the class was to facilitate the “real world” of tech and journalism. In doing so, the students had the opportunity to work together and “define an emerging piece of technology that has yet to be defined.”

“These are the first drafts of journalism with this technology,” Hernandez added.

In previous semesters, Hernandez has taught classes that followed a similar structure, but explored a different technology, such as Google Glass and Augmented Reality.

Hernandez hopes to make the class permanent, with a consistent structure, but a new technology every time. The class aims to be “proactive about emerging technology” by exploring both its limitations and possibilities.

“The work these students are making will have an impact on the industry, and that’s not a typical thing that you see in the classroom,” Hernandez said.

Coyle echoed this sentiment in pointing out the emphasis that USC Annenberg places on having digital journalism skills.

*In order to see the videos in VR, your browser must support 360° video.

A look back at election night at Wallis Annenberg Hall
Quoted: Robert Hernandez on what VR means for journalism, and more
Quoted: Professor Sandy Tolan reporting from Standing Rock, and more
Professor Robert Hernandez and his JOVRNALISM team partner with ProPublica and The Texas Tribune to head off a large-scale disaster