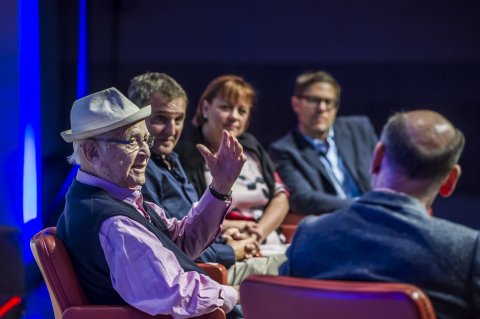 Marty Kaplan, Norman Lear, Phil Rosenthal, Sherry Yard and Josh Kun discuss memories and influences of food in their own lives at Expo Milano 2015.
USC Annenberg / Norman Lear Center
Food, especially sugary foods and desserts, plays a leading role on American primetime TV entertainment, and satirical news on The Daily Show can change viewers’ eating habits for the better, according to new research from the University of Southern California released at Expo Milano 2015, the World’s Fair now under way in the commercial and cultural capital of Milan, whose theme is “Feeding the Planet/Energy for Life.”

The research, conducted by the Lear Center’s Hollywood, Health & Society program, comes from a content analysis of more than 1,300 episodes of the most-watched American TV shows over a 10-year period. It found that food was depicted in about eight out of 10 primetime episodes. Fruits and vegetables were shown onscreen as frequently as cookies, ice cream and other sugary foods. But when researchers analyzed the food that characters were shown eating, desserts were consumed more often than healthy food. In comedies, sugary food was eaten nearly two-and-a-half times more often than fruits and vegetables. 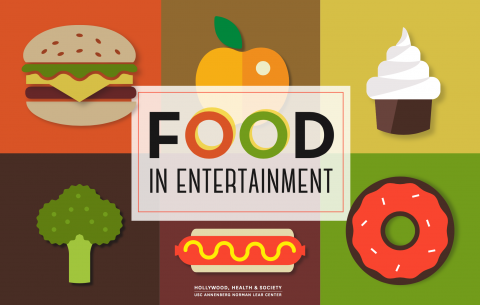 An analysis of more than 1,300 episodes of American TV shows over a 10-year period found that food was depicted in about eight out of 10 primetime episodes.
USC Annenberg / Norman Lear Center
“We know from other research that viewers are influenced when characters similar to themselves model healthy or unhealthy behavior,” said Kaplan, adding, “Is it any wonder that America has a giant sweet tooth?”

Researchers also assessed the impact of so-called “fake news” on audiences. In a 1,600 person sample, one group watched a segment of The Daily Show with Jon Stewart about the food industry’s conflicting messages about nutrition. Others viewed a video or a print news story with the same information, but without the satire. Compared with those who saw the straight video or print stories, initial findings indicate that viewers of the Daily Show story remembered more information; became more cynical about the food industry, but were more optimistic about changing it; and a month later were eating more fruits and vegetables.

For more information about the findings, go to www.usc.edu/hhs.