Each year, the best and brightest minds in the world of journalism and media convene at The Association for Education in Journalism and Mass Communication (AEJMC) Conference. 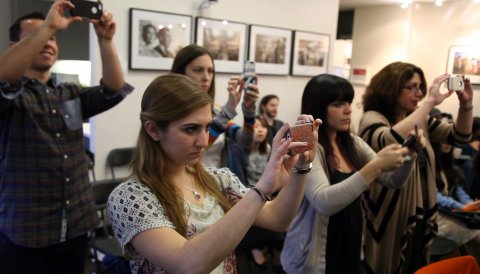 By Brett Van Ort
And, as always, USC Annenberg will be well-represented at the 2014 gathering.

“It is the only place where you can meet and talk with journalism and communication educators and media scholars on a personal, professional and academic basis,” Saltzman said of the conference. “It is a marvelous opportunity to see how other schools of journalism tackle curriculum problems, research, publication and tenure problems, and the future of journalism in these changing times.”

During the three day conference, Professor Felix Gutierrez will present on the panel "Minority Scholars Forging Ahead In Academia: Guidance from Communication Theories, Research Findings and Personal Experiences,” while Saltzman will present on a panel about the pros and cons of embedding pro-social messages in entertainment. Past Annenberg faculty presentation topics have included public relations, entertainment studies, LGBT issues and more.

“Since USC Annenberg is a leader in many of these fields, we have a chance to share ways of doing things that are unique and interesting to academics,” Saltzman said. “The AEJMC conference gives us a chance to exchange ideas, opinions, concepts with journalism scholars from around the world.”

Annenberg Professors Kjerstin Thorson and Aimei Yang will also contribute to interest groups and research sessions at the conference, Professors Jerry Swerling and Mike Ananny presented a panel, and Professor Robert Hernandez will receive a second-place Best of the Web Award for his ARchive LAPL project (though he will not be in attendance). Designed by a class of seven undergraduate and graduate students under Hernandez’s leadership last fall, the ARchive LAPL project is an Augmented Reality (AR) iPhone application called Junaio which, when used at the Los Angeles Central Library in conjunction with the iPhone camera, pulls up historical and architectural information about the library including news articles and photos.

“We looked at how how this new emerging technology that takes advantage of a smartphone or potentially a wearable device can really elevate the concept of contextual storytelling for journalism,” Hernandez said of the Augmented Reality course, which was taught for the first time at USC last year. “It knows where you are and what you’re looking at and has the power of the internet, and we wanted to combine that for a new way of storytelling.”

Given the success of the application, as well as favorable feedback from City Hall, Hernandez will teach another Augmented Reality course in the spring and hopes to be able to apply the same innovative technology to augment other Los Angeles landmarks. Hernandez received a second and third-place award at last year’s AEJMC conference for his work with Professor Gutierrez on the Ruben Salazar Project, and plans to submit more work in the future, furthering enriching USC Annenberg’s fifteen-year history with the AEJMC conference. The AEJMC is a nonprofit education association whose mission is to provide media professionals, educators and students with resources to advance education, research and professional practice about journalism and mass communication.

“For me personally, the AEJMC has made it possible for me to turn the image of the journalist in popular culture into a worldwide discipline recruiting faculty and students from around the world to think about this subject,” Saltzman said. “Without the AEJMC conference, there would have been no efficient way to reach all of these people and to explain to them, through my panels and video compilations, through meetings and social exchanges, through personal and professional contacts, what the IJPC is and why it is important.  For me and the IJPC, the AEJMC conference has been one of the most valuable ways of extending the USC Annenberg brand throughout academia.”

Though this year’s conference attendance was somewhat smaller than in years past due to the current flurry of activity and exciting changes at USC Annenberg, faculty presence at the conference is still strong, and Saltzman hopes for even greater Annenberg representation at next year’s AEJMC Conference in San Francisco.