A journalist’s chronicle of how he affected social change

For Daniel Heimpel, the direction for his career came from a most unusual place: coaching lacrosse to inner-city high school students.

How he got there could have been ripped from the pages of a screenplay. With a master’s degree in journalism from USC Annenberg, he started freelancing, trying to figure out where — and how — he wanted to make his mark. This was 2007 and the internet was taking over and journalists were having a hard time finding jobs.

“The field was really grappling with what the web was doing to revenues of the historic pillars of for-profit journalism,” Heimpel said. “And so, it was a very bleak and dire time. I think, in my mind, whether or not I really knew it at that time, I realized that I was going to have to forge my own path. I think USC Annenberg was helpful in crystallizing that thought.” 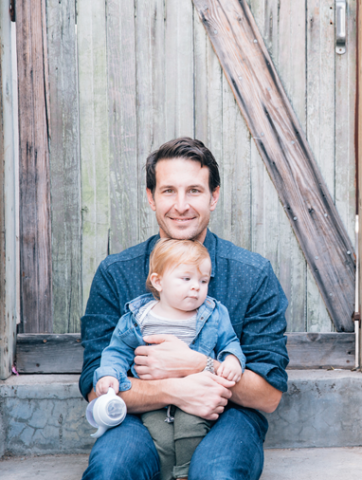 Daniel Heimpel and son.
Photo courtesy of Daniel Heimpel
As part of a journalism assignment in graduate school, Heimpel wrote a story about a lacrosse team at Manual Arts, a school not far from USC. This led not only to the basis of his thesis but inspired him to start coaching the students.

“One day, one of the students, Chris,” Heimpel said, “was having a tough time and started to get angry, blustery. I asked him: ‘What do your parents say when you act like that?’ He told me that he didn’t have any parents, that he lived in a group home.”

“I went to his group home and met six boys and I was just thinking: ‘How are these guys going to make it? They’re just in his house in South Los Angeles without any moms.’ And I saw in Chris a kid who could do great things.”

Heimpel continued to mentor Chris while also looking for places to talk about what was happening in the foster care system.

“I was always sneaking in stories about foster care,” Heimpel said. “I kept on jumping publications with pitches about child welfare. That got me invited to D.C., at a convening of journalists put on by the Annie E. Casey Foundation. And the goal of that was to get a bunch of journalists together to talk about the recently passed law at the time that would extend foster care privileges to 21.”

This experience started to lay the foundation for his career in covering social issues.

In 2012, Heimpel moved to the Bay Area, where he grew up, and created a journalism course for social change at the University of California, Berkeley. He later brought this same course to the University of Pennsylvania School of Social Policy and Practice and to USC, where he taught in the USC Sol Price School of Public Policy for public policy, journalism and social work students. The class is now available online through Berkeley’s Edx learning platform.

In the class, Heimpel emphasizes to his students that they should “give equal attention to some endemic problem as to its potential solution.” He calls it “solution-based journalism.” “That’s not to say that one has to come up with the solution or write policy,” he said. “It’s more about here is a problem, what are we, as a nation going to do to help solve it.”

In 2012, Heimpel founded Fostering Media Connections (FMC). FMC became a catalyst for bringing together leaders around the issues of foster care. Now, they also train student journalists, policymakers and social workers to use journalism to drive social change. The following year, he launched The Chronicle of Social Change, an online news outlet focusing on issues affecting vulnerable children, youth and families.

“You need to understand the totality of what’s going on,” Heimpel said. “For me, that means showing the journalism world that you can tell great stories about kids and families in crisis without focusing on the most salacious details. Our belief, my belief, is that there is really a central theme to social justice in this country. If we can make that clear and tell that broader story, that’s how we can make change happen.”

He has received several prestigious awards for his work and on March 7 will be awarded the George D. Nickel Award for Outstanding Contributions to Social Welfare by California Social Welfare Archives at the USC Suzanne Dworak-Peck School of Social Work.

“Social workers are not really seen for who they are, which I think are really heroic individuals in many cases,” Heimpel said. “They are often paid poorly, work long hours, go through mountains of secondary trauma, just to try to help. But many of them are the ones who give us the stories, they’re the ones who see it on the ground and come up with solutions that we cover. So, as an honoree, this is pretty good group of people to be associated with.”