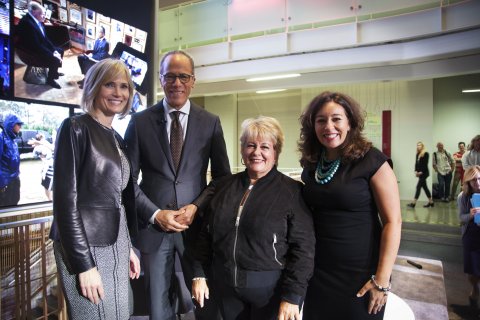 As part of the Rebecca Donatelli Expert-in-Residence speaker series, Dean Willow Bay welcomed award-winning journalist Lester Holt to an open discussion about news reporting. Left to right: Dean Willow Bay, Lester Holt, Rebecca Donatelli and Elizabeth Donatelli
Photo: Olivia Mowry
“There’s lot of great investigative reporting going on right now. There’s a lot of unprecedented things happening in government, which are making for some really fascinating stories. But all eyes are on us in a way that’s never been before,” said veteran newsman Lester Holt to a packed forum in Wallis Annenberg Hall on Nov. 16.

The award-winning American journalist has been on the front line in a career that spans over three decades. He’s covered stories at home and abroad, from the recent hurricanes in Texas to the US military troops in South Korea. He is widely known for his groundbreaking news reporting and in-depth political coverage. Since 2015, he has been the anchor of Weekday Edition of the NBC Nightly News and is also the current host for Dateline.

The conversation was part of the Rebecca Donatelli speaker series, designed to inspire students to enter the field of political media and bring experts to campus who focus on political communication and analysis.

Donatelli (B.A., international relations, ’75), an online political pioneer and the parent of Elizabeth Donatelli ’04, a USC Annenberg graduate, was pleased with the program featuring Holt. “Lester Holt is probably one of the most respected journalists on television today. He is one of those ethical guys that thinks journalists should be reporters and not opinion makers,” she said.

During the one-hour conversation moderated by USC Annenberg Dean Willow Bay, they discussed President Trump, a journalist’s responsibility in being transparent and reporting as a critical thinker.

Here are some key takeaways from the discussion.

Has fake news been weaponized?

I think we’re even more careful than we’ve ever been, and I think we’re very careful at an organization like NBC news — there’s a legacy, there’s a tradition of excellence of fact checking, of attribution of sources. But, you tend to double down in a case like this, when you’re being accused not only as a network, but across the broad sweeping landscape of journalism that you’ve got to get it right.

Sometimes I wish I could sit the critics down and say, ‘Let me tell you about some other stories, some incredible stories that we never told, stories that maybe had one source, or two sources,’ but we have to operate on the level that when we go on air with something, have to be able to back it up.

We have a responsibility to not only inform our viewers, but to try and hopefully impart to them that you need not only hold us accountable — but all sources of information — right now. That in itself is a good exercise.

On the debate with President Trump

There’s never been anything more challenging in my life. I will say that. The difficult thing wasn’t asking the questions, but instead turning on cable TV and hearing people talk about me. ‘Well, he needs to do this, well I think he should do this. Well, he’s not going to fact check.’ And, you know, you’d like to think that doesn’t get into your head, but it does get into your head. But you try to tune it out the best you can. It was incredibly challenging, because of the nature of the two candidates.

We had the structure that I was given by the debate commission, but there was a plan of how we’d move through. I started losing control. They really started plowing over me and there was a moment I said to myself, ‘You know what? The hell with it. You picked the newsman to do this and this is what we're going to do.’ We know how to ask questions. It was also the point where I felt like I kind of took the handcuffs off of this sense of equivalency. I’m just going to go where the stories are, and that’s what I did.

Transparency in the age of social media

I think the most important thing about journalism right now is transparency. It is important to say who you are. I represent, proudly, a mainstream news organization. I know that’s a negative term among a lot of folks, but that’s what I do. That’s the expectation of our audience. They don’t expect me to come on and voice my opinion every night, but they do expect me to not be blind and to call out things that need to be called out.

There’s always going to be a need for people to tell stories, but one of the things I’ve seen happen in my career is that, while the gathering of news and the reporting of news hasn’t changed, the platforms that we put them on have.

It’s one thing to tap our expertise — what you’ve covered or your observations. But, when we get into the pundit world too much, I think we risk falling into these traps, and I think Twitter can be one of those traps.

I think Twitter is useful for the ‘Here’s what I'm seeing,’ ‘We’ve got this incredible interview tonight’ or, ‘I just sat down with President Trump.’ That’s where I feel safer. But I think journalists have to be very, very careful right now.

One of the phenomenons that we’re watching right now — that I’ve never seen — is that that five, 10 years ago when there was a mass shooting or a tragedy, we would’ve been there all week and maybe into the second week. America would’ve kind of stopped and slowed down, and absorbed the horror of these things. Now they’re happening at such a frequency and the rate that we're being shocked on so many levels right now has really given these things very short attention. 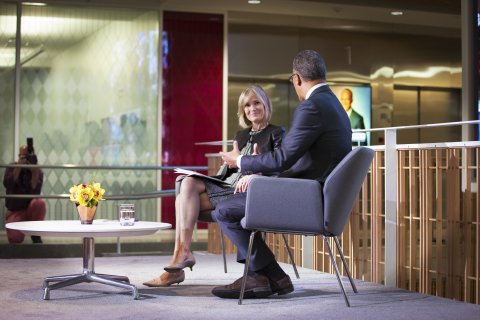 Dean Willow Bay in conversation with Lester Holt
Photo: Olivia Mowry
We had a terror attack in New York a few weeks ago. It feels like it was months ago. Somebody ran down eight people on a bike path. The shooting in Las Vegas, Texas. But largely our attention moves on very quickly. That doesn’t mean we’re bad people. It just means we’re being overwhelmed right now on so many levels.

I think the biggest challenge is this sense of numbness. Part of our jobs as journalists is to continue to point out what is not normal and some of these things are not normal and we shouldn’t be numb about it. As I say to my son [Stefan Holt, anchor at WNBC in New York], maybe the calling is that we have to continue to remind people to get upset. Some of these things happening are not acceptable in our society and we’ve got to pay attention.