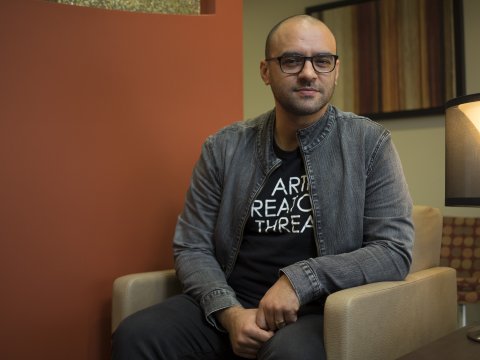 Recently awarded with an Innovation and Inclusion Award by the Digital Diversity Network, Mauricio is founder and co-president of Wise Entertainment. Along with his wife Katie, he serves as executive producer of East Los High, an award-winning drama series that has earned five Emmy nominations since its debut on Hulu in 2013 for its realistic portrayal of Latino high school students. Now in its fourth season, the show is the streaming platform’s longest running original.

Mota began his career as an entrepreneur at the age of 15 when he developed a storytelling board game with writer Sonia Rodrigues, which he sold door-to-door all over Brazil and where it is now present in over 5,000 schools. It later became a YA book collection and has been used by many Forbes 500 companies and the United Nations to foster creativity and innovation among their leaders. The patent of the game was used as the foundation for a literacy social network employed by 700,000 kids in public schools in Rio.

Mauricio was the first Latin American to speak at the Futures of Entertainment conference at MIT. He has been a judge on many international juries, such as Cannes Lions Festival of Creativity, Festival of Media, The Emmys and the One Show.

Mota represents the fourth generation of one of the most important Latin American storytelling legacies, and has helped his mother re-shape the estate created by his grandfather, Nelson Rodrigues, who is considered the Brazilian Shakespeare. Most recently, he designed the School of Series, a TV series/IP development lab that will shape the next generation of showrunners and content creators in Brazil, and trains 800 writers and producers a year.

He sits on the boards of Scriptd (an online marketplace for screenwriters), Young Storytellers (a non-profit focused on mentoring low-income students through storytelling) and Center for Third Space at the Annenberg School (an Institute focused on shaping the next generation of business leaders). Mauricio also has spoken for national and international audiences including The White House Fellowship, the State Department and the World Bank.