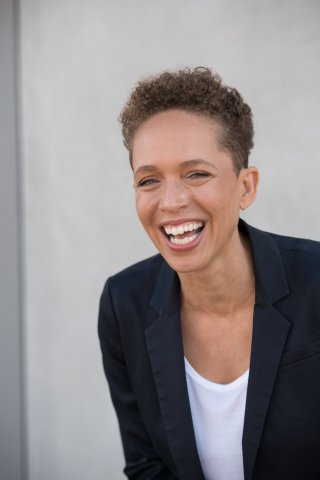 An award-winning playwright, actor, producer and educator, Fanshen Cox DiGiovanni is currently touring the one-woman show she wrote and performs in: One Drop of Love. One Drop travels near and far, in the past and present to explore the intersections of race, class and gender in pursuit of truth, justice and love. The show is produced by Cox DiGiovanni, Ben Affleck, and Matt Damon.

Fanshen has been featured in the New York Times and on NPR as a spokesperson on using the arts to explore racial identity. She served as a Peace Corps Volunteer in Cape Verde, West Africa, and has designed curricula for and taught English as a Second Language to students from all over the world. She has been honored with the Peace Corps’ Franklin H. Williams Award, and with Peace Corps Fellows and Hollywood Foreign Press Association scholarships and an ‘Exemplar of Humanity Centered Media’ award by Media Done Responsibly. She holds a BA in Spanish and Education, an MA in TESOL, and an MFA in Acting and Performance in Film, TV and Theater. She serves on the boards of the non-profit MixedRootsStories.org and of Project Greenlight Digital Studios. Her play, One Drop of Love, was awarded Best Non-Fiction Script by the United Solo Theatre Festival, and the film version won Best Documentary Film at the Roxbury International Film Festival and is an official selection of the San Francisco Black Film Festival and the Black International Film Festival.