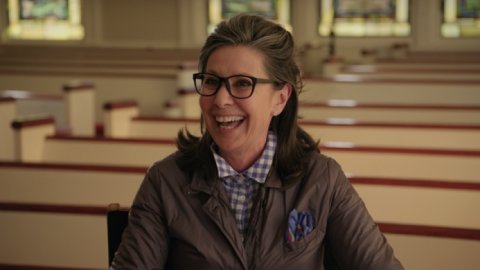 Donna Gigliotti is one of only nine women to win an Academy Award for Best Picture. She received the 1998 Oscar for producing Shakespeare in Love. Among its thirteen nominations, seven Oscars were awarded the film, including Best Actress (Gwyneth Paltrow), Best Supporting Actress (Judi Dench) and Best Original Screenplay (Tom Stoppard and Marc Norman). Gigliotti also received the 1999 Golden Globe for Best Picture/Comedy and the 2000 British Academy Award (BAFTA) on behalf of the film.

Gigliotti’s fourth Best Picture/Academy Award nomination was granted in 2017 for Hidden Figures. The film recounts the story of three black women mathematicians whose work at NASA proved integral to the United States’ successful space program. It was a worldwide success, grossing an astonishing $230 million and has inspired a national conversation about women and STEM.

Formerly, Gigliotti served as president of production at The Weinstein Company beginning in 2010 where, in addition to executive duties, she also produced I Don't Know How She Does It, starring Sarah Jessica Parker. She was instrumental in the productions of My Week With Marilyn, starring Michelle Williams, Our Idiot Brother, starring Paul Rudd, W.E., starring Andrea Riseborough and the animated film, Escape from Planet Earth.

Gigliotti began her career in the motion picture industry as an assistant to Martin Scorsese on Raging Bull.

Following her work on Raging Bull, Gigliotti moved to United Artists, where she was the director of acquisitions for specialty division UA Classics. There, with partners Tom Bernard and Michael Barker, she acquired Jean-Jacques Beineix’s Diva, François Truffaut’s The Woman Next Door and Rainer Werner Fassbinder’s Veronika Voss.

Next, Gigliotti moved (with Bernard and Barker) to form Orion Classics for Arthur Krim, former chairman of United Artists and then chairman of Orion Pictures Corporation. Orion Classics proved to be the preeminent distributor of specialized films during the 1980s. Gigliotti was responsible for the acquisition of such films as Louis Malle’s Au Revoir les Enfants, Pedro Almodovar’s Women on the Verge of a Nervous Breakdown, Steven Frears’s My Beautiful Laundrette, Akira Kurosawa’s Ran, Claude Berri’s Jean de Florette and Gabriel Axel’s Oscar-winning Babette's Feast.

In 1985, Gigliotti became the youngest woman knighted to the rank of Chevalier des Arts et des Lettres by the French Republic. She is a member of the Academy of Motion Picture Arts and Science, the European Film Academy and the Producer's Guild of America. Gigliotti is a graduate of Sarah Lawrence College.