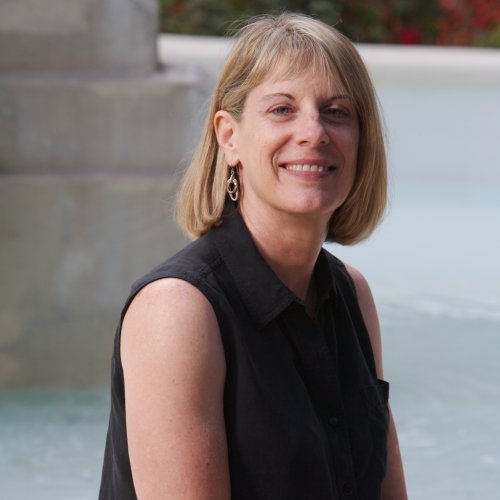 Dr. Pamela K. Starr is the director of the U.S.-Mexico Network, a university fellow at the USC Center on Public Diplomacy, and an associate professor of teaching in the School of International Relations and in Public Diplomacy. She came to USC from the Eurasia Group, one of the world's leading global political risk advisory and consulting firms, where she was senior analyst responsible for Mexico.

Prior to that, she spent eight years in Mexico as a professor of Latin American political economy at the Instituto Tecnológico Autónomo de México (ITAM), a private university in Mexico City. Dr. Starr is an active speaker, commentator, and author on Mexican politics, economics and foreign policy, and on economic reform and policy making in Latin America. She is the author of a 2009 Pacific Council on International Policy report, “Mexico and the United States: A Window of Opportunity?”, the Council on Foreign Relation’s special report on the 2006 Mexican election, “Challenges for a Postelection Mexico: Issues for US Policy”, and is currently writing a book on Mexico entitled " A Quarter Century of Policy Reform in Mexico: Unexpected Drivers and Unintended Consequences. Starr has also worked as a consultant to investment banks and securities firms, has briefed officials on both American and Mexican officials on the bilateral relationship, including Secretary of State Hillary Clinton, US Ambassador Carlos Pascual, Mexican Senator Carlos Navarrete, and gatherings of staffers from the Foreign Relations Committees of the US and Mexican Senates. Dr. Starr’s research and writing focuses on three main topics: U.S.-Mexico relations, the politics, economy and foreign policy of contemporary Mexico, and the politics of economic policy-making across Latin America.

In a series of books and book chapters, peer-review journal articles and policy-oriented publications, Dr. Starr has also illuminated the interplay between political and economic developments in shaping economic policy in Mexico and Latin America. On the basis of this research, Dr. Starr has given talks throughout the hemisphere to a wide range of audiences, including the World Economic Forum, the IMF, the Inter-American Development Bank, the US Department of State, the US Embassy in Mexico City, the US State Legislative Leaders Foundation, the Mexican legislature and the Ecuadorian Central Bank. Dr. Starr has held research positions in Argentina and Brazil and at the Center for Strategic and International Studies (CSIS) in Washington, DC. She has received grants and fellowships from the Pew Charitable Trusts, the Earhart Foundation, the Organization of American States and the Woodrow Wilson International Center for Scholars. Dr. Starr is an associate of the Inter-American Dialogue and an active member of the Latin American Studies Association and the American Political Science Association.

Description of Research
Summary Statement of Research Interests
During the past year I have focused both my teaching and research heavily on my fascination with Mexico – its politics, economic policy, and relationship with the United States. Following up on my 2009 report for the Pacific Council, The United States and Mexico 2009: A Window of Opportunity?, this included a new undergraduate course on “Mexico and its Relations with the United States” which I taught in the spring and fall 2010 semesters; publishing two papers on Mexico-related issues with a third to be published this fall, plus two review essays; commenting in various venues in Mexico and the U.S. on Mexico and U.S.-Mexico affairs; and beginning a book tentatively entitled “Twenty-Five Years of Policy Reform in Mexico”. Perhaps most interesting, however, is a prototype web site on Mexico and U.S. Mexico affairs, the “U.S.-Mexico Network @ USC” developed with the financial and logistical support of the College and with small grants from the Annenberg School for Communication and Journalism and the Center for International Studies. The web site is designed to be a virtual conference center where three kinds of conversations can take place simultaneously on a wide range of Mexico-related issues – hallway chats where participants discuss whatever issue happens to be on their minds; virtual seminars; and virtual links to real world conferences that expand both the number of participants and the time they can interact. The objective is for these conversations among academics, journalists, public intellectuals, and other “informed” individuals is to generate new ideas, new collaborations and mentoring relationships, and new lines of bilateral communication and understanding.

Affiliations with Research Centers, Labs, and Other Institutions

Other Research
Designing, initiating, and managing the U.S.-Mexico Network@USC, a proto-type of what should develop into a novel web site project that promotes informed conversations among academics, journalists, and other opinion leaders on both sides of the border on a wide range of issues related to Mexico and US-Mexico affairs. During its first year of operation, these conversations have included virtual seminars based on the research projects of USC graduate students; virtual links to two real world conferences including the 2010 Latin American Studies Association Congress; and series of discussions on relevant current issues in the areas of public health, arts & culture, security, migration, economics & politics, and US-Mexico relations. The Network made a special effort to encourage its participants to exchange opinions during Mexican President Felipe Calderon’s state visit to Washington, DC, in May 2010 and the Mexican midterm elections in July and has provided a constant conversation on the difficult security situation in Mexico and its impact on the bilateral relationship. The ability of the Network to attract participation from throughout North America has enabled it to make a solid down payment toward its aim of using the power of the internet to expand the binational debate – in numbers of participants, in geographic scope, and in regularity – beyond what can be done in a traditional research center and to thereby generate an expanding array of mentoring relationships and unexpected acquaintances, cross-disciplinary conversations, and scholarly and non-scholarly collaborations., 2009-2010.

Service to the University
Administrative Appointments